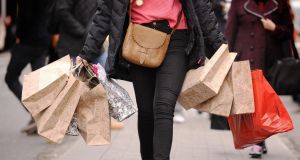 Clothing and footwear rose 1.6% in March, increases linked to the end of the early-year sales

Inflationary pressure in the Irish economy remains extremely weak, with the latest Consumer Price Index (CPI) showing prices nationally rose by only 0.2 per cent in the year to March, down from 0.5 per cent in February.

The main monthly changes affecting the CPI in March were increases in the cost of clothing and footwear, which rose 1.6 per cent. This was linked to the end of the early-year sales.

The cost of transport, which includes car prices and air fares, rose 1.5 per cent, while restaurants and hotel accommodation prices climbed 0.9 per cent in the month.

Conversely, there were decreases in miscellaneous goods and services (-0.9 per cent), which includes health insurance premiums and the cost of personal care products.

The average cost of motor insurance in the Republic fell 13.8 per cent year-on-year in February, the latest numbers show. The cost of household furnishings and equipment fell by 0.9 per cent.

“Despite strong Irish economic growth there is little sign of sustained pressure on the prices front, which appears to be the same story across the euro zone, suggesting that the European Central Bank will be in no hurry to increase interest rates,” said Merrion analyst Alan McQuaid.

“Although the annual inflation rate should pick up in the coming months, inflationary pressures in Ireland, as measured by the headline consumer price index, are in general likely to stay well contained for the immediate future.

“Oil prices will be critical in determining the headline inflation outlook over the next 12 months or so, but they remain volatile and hard to predict given the uncertainty over Opec supply and geopolitical tensions in the Middle East,” said Mr McQuaid.

Euro zone inflation was 1.4 per cent in March, below the European Central Bank’s 2 per cent target rate.