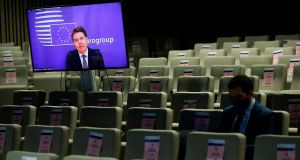 Lessons from Ireland’s economic crisis are shaping the European Union’s economic response to the coronavirus pandemic, Minister for Finance Paschal Donohoe has said in an interview with The Irish Times.

Mr Donohoe said there was a “profound difference” in the approach of the EU to the Covid-19 challenge compared to the aftermath of the 2008 global financial crisis. He expressed the hope that spending to support businesses and incomes will help prevent the build-up of bad loans that could drag on economic growth for years.

“We have experience in Ireland of what those challenges are,” said Mr Donohoe, who was elected president of the Eurogroup, the powerful body of euro zone finance ministers, this summer. “I use the experience that I have on these issues within Ireland to influence the direction of policy for those areas.”

Intervention by the European Central Bank to bid down borrowing costs, a massive stimulus programme, and wage support schemes across the bloc are all aimed to lessen the economic impact and duration of the pandemic, and prevent members states struggling with high interest rates on debt.

“There is a very strong appreciation within the European Union at the moment that we need to have budgetary policies that support the retention of jobs and support income while we are battling with a health crisis,” Mr Donohoe said. “That is a profound difference from where we were a decade ago, and that reflects our learnings from the crisis.”

There have been some calls for the joint EU borrowing initiative that will fund its €750 billion recovery fund to be made a permanent feature of the bloc, a milestone in integration. The Eurogroup head opposes this.

“I think we should only have this kind of common borrowing in dealing with common challenges of this scale,” Mr Donohoe said. “Outside of a crisis like this, it is up to national governments to fund national policies.”

Mr Donohoe’s first success as Eurogroup president has been shepherding an agreement to widen the uses of the EU’s European Stability Mechanism bailout fund. The changes were described by German finance minister Olaf Scholz as a reform “so technical that it is difficult to see their political impact at first”.

In layman’s terms, Mr Donohoe described the reform as strengthening a “safety net and an additional support for banks that get into great difficulty”, preventing the future likelihood of taxpayer bank bailouts and consequences for public spending.

Back home, with NatWest weighing whether to close down its Ulster Bank arm, Mr Donohoe said he had met the company leadership and emphasised its importance in the Irish banking system. “This is a process that NatWest are leading themselves, and I have to recognise that.”

Member states have been lobbying for a share of the Brexit Adjustment Reserve – a pot of €5 billion agreed to help hard-hit EU member states. France has argued that much of it should go to support its fishing industry but the division will depend on the outcome of talks with the UK.

“There’s not a European project in existence that there isn’t great competition for,” Mr Donohoe said. “I’m very confident that we will get an outcome that recognises how Ireland is affected by Brexit.”

Irrespective of whether a deal is struck or not, Ireland’s economy after January 1st will be different to how it was when Britain was an EU member due to barriers that will make some kinds of trade unviable, he said.

“The economy that we will move to will be different to the economy that we had with Britain within the European Union. That is the case,” Mr Donohoe said. “It’s why we spent four years working really hard to try to get them ready for this point. And yes, it will put pressure in particular on smaller Irish exporters and smaller businesses that trade heavily with the United Kingdom. ”