Agriculture and rural development received 86% of €1.8bn paid out by bloc, report shows 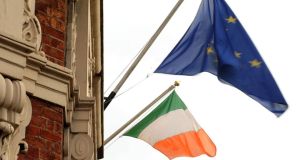 Since 2014, the Republic has received less money from the EU than it has contributed. File photograph: Aidan Crawley/Bloomberg

The Republic contributed a net €200 million to the EU in 2017, the latest figures show.

A report published by the State finances watchdog, the Comptroller & Auditor General (C&AG), Séamus McCarthy, shows that the Republic received €1.8 billion from Brussels in 2017.

“Financially, Ireland was a net beneficiary of the EU until 2014,” a statement from the C&AG’s office said on Wednesday. “Since then, Ireland has received marginally less than it has contributed.”

His report shows that agriculture and rural and regional development accounted for 86 per cent of the cash the Republic received from Brussels in 2017. Payments to EU bodies based here made up the balance.

The European Agriculture Guarantee Fund (EAGF) was responsible for the bulk of this, making almost €1.23 billion in payments to beneficiaries in the Republic in 2017. This was around 10 per cent more than the €1.1 billion received the previous year.

The fund makes direct payments to farmers and supports prices for food through measures such as market supports and refunding exporters for selling goods to non-EU countries.

The Department of Agriculture, Food and the Marine pays the Republic’s farmers under the scheme and then recoups the cash from the EU. Total EAGF payments made up 56 per cent of farm incomes in 2017, according to Mr McCarthy’s report.

The Republic received close to €280 million for rural and regional development funding in 2017. Most of it, €255 million, went to rural development.

This cash is used to boost Irish farming’s competitiveness, as well as for sustainable management of resources and climate action, and to develop rural economies and communities.

The regional development cash, which totalled €24 million in 2017, was used to fund research and innovation, supporting small business competitiveness and sustainable urban development.

Mr McCarthy’s report suggests that the Republic is likely to remain a net contributor to the EU. Talks on Brussels spending commitments for the period after 2021 have already begun. The C&AG predicts that the outcome of these negotiations will set the financial relationship between the State and EU for the medium to long term.