Prices fall for medical and dental services, eating out and package holidays 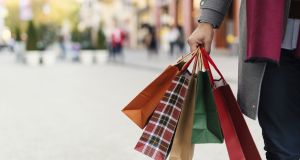 Consumer prices declined by 1 per cent in the year to December as the cost of clothing, furniture and fuel all fell.

That was offset by rises in the prices of medical and dental services, eating out and package holidays.

The figures from the Central Statistics Office showed a 7.8 per cent fall in the cost of clothing and footwear, attributed to sales, while transport costs were dragged lower by a fall in prices for diesel and petrol.

The cost of furnishings, household equipment and maintenance fell almost 4 per cent in the year to December, with a reduction in the price of home heating oil, lower rents and a fall in the cost of natural gas contributing to the decline. That was partially offset by an increase in the cost of electricity and higher mortgage interest repayments.

On a monthly basis, consumer prices rose 0.3 per cent compared with November, fuelled by a rise in the cost of restaurants and hotels, as accommodation prices climbed, and transport costs increased due to higher airfares.