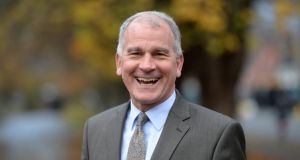 Canadian ambassador to the EU Dan Costello: “We all have to be concerned about some of the sentiment out there about building walls rather than bridges.” Photograph: Dara Mac Dónaill

The new trade deal between the European Union and Canada is “game-changing” for businesses in both countries, Minister for Trade Simon Coveney has said.

The EU-Canada agreement, known as the Comprehensive Economic and Trade Agreement, or Ceta – which came into force provisionally in September 2017 – has given Irish companies “preferential access” to a G7 economy and increased access into the wider North America market, Mr Coveney said.

The Tánaiste was one of a number of high-profile speakers at the Ireland Canada Business Association conference at the Department of Foreign Affairs in Iveagh House in Dublin.

He spoke about the importance of the free trade agreement coming into force at a time when there is a shift to economic nationalism with the United Kingdom’s vote to leave the European Union and the Trump administration’s policies to impose tariffs on Canadian and European products.

“We are strong allies in resisting growing trends towards protectionism and isolation. What is most striking is that in many ways that threat is coming from unexpected quarters and our closest neighbours,” he said.

The Tánaiste provided figures showing the benefits of Ceta; there had been an almost 25 per cent increase in the value of Irish exports in the first eight months of this year, totalling €899 million, compared with the corresponding period last year before the trade deal came into force.

Figures from the Canadian embassy show Ireland has benefited more from the deal: Irish merchandise exports to Canada were up almost 34 per cent to almost €2 billion during the first year of Ceta (October 2017 to September 2018), while Canadian exports to Ireland rose 10 per cent to €417 million.

“That’s not nothing; that is very impressive,” said Canada’s ambassador to the EU, Dan Costello.

Mr Costello said Canada recognised the populist, anti-globalisation fervour against trade deals and the importance of explaining the benefits of free trade, even to critics, to counter the view that agreements such as Ceta were lowering labour, health, safety and environmental standards.

“We all have to be concerned about some of the sentiment out there about building walls rather than bridges,” he said.

He declined to comment on whether the EU-Canada deal, which took eight years to negotiate, could be used as a template for a post-Brexit EU-UK trade deal.

James Rossiter, senior global strategist at Canadian finance firm TD Securities, offered an upbeat forecast for the Brexit negotiations, saying there was a 75 per cent chance of a deal being reached between the EU and the UK and an 80 per cent chance of the British parliament passing the deal.

“We expect it will be a fudge that allows everybody to claim their own interpretation on success,” he said.

He warned of risks coming from the involvement of Geoffrey Cox, British prime minister Theresa May’s attorney general, in deciding whether the UK should agree to a compromise with the EU on the Northern Ireland backstop – the fail-safe option to avoid a hard border after Brexit.

“Once you bring lawyers into a fudge, it can spell trouble,” he said.