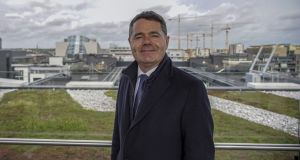 Minister for Finance Paschal Donohoe will meet new ECB president Christine Lagarde in Frankfurt on Monday during a two-day trip to Germany.

The visit by Mr Donohoe is the latest in a series of senior Cabinet visits to Germany in recent months aimed at building closer ties to the EU’s largest member ahead of Brexit.

In Berlin on Tuesday he will meet Peter Altmaier, the federal economics minister, Bundestag president Wolfgang Schäuble and speak on a panel alongside federal finance minister Olaf Scholz.

“Germany is our second-largest source of inward investment, third-largest source of tourism and fourth-largest overall trading partner, and the Government is committed to further deepening ties with this important partner,” Mr Donohoe said in advance of his visit.

“I’m looking forward to engaging with my German colleague Olaf Scholz and other members of the German government to discuss how to further strengthen the already close political and economic ties, and our shared work on the EU agenda.”

Mr Donohoe’s meeting with Ms Lagarde comes amid growing hostility towards the ECB and its new president in the German media and political circles.

Ms Lagarde’s chief economist, Irishman Philip Lane, has so far been spared the wrath of the German media

Ms Lagarde was introduced recently to Bild readers under the headline: “How dangerous is this French woman for our money?” Another article dubbed her a “wolf in sheep’s clothing”, noted her stylish appearance and asked: “A woman charged with guarding our money but a spendthrift in clothing?”

Her chief economist, Irishman Philip Lane, has so far been spared the wrath of the German media.

“With his boyish face, the 50-year-old looks younger than he really is,” the Handelsblatt business daily noted of the former head of the Central Bank of Ireland. “Personally, he is considered approachable and unpretentious – and that’s why his colleagues like him.”