Revenue says over 50,000 companies have now signed up for emergency payments 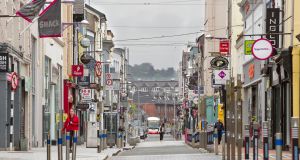 A total of 427,000 workers are now being paid through the temporary wage subsidy scheme put in place to limit job losses during the Covid-19 pandemic. Photograph: Daragh Mc Sweeney/Provision

Another 64,600 workers have started getting paid by the State this week through the temporary wage subsidy put in place to limit job losses during the Covid-19 pandemic.

The figure marks an increase of more than 20,000 on the numbers who signed up last week.

The subsidy, which pays up to 85 per cent of employees’ take-home pay up to a maximum of €410 a week, is designed to keep workers’ on their employers’ books in the hope of a quick economic bounce back when the worst of the coronavirus crisis passes.

Figures released from the Revenue Commissioners on Thursday shows that 427,000 workers have now received at least one payment under the wage subsidy programme.

The money is paid through employers, who must apply on behalf of their staff. As of yesterday, Revenue said, 50,900 employers have signed up for the scheme. Of these, 43,000 have already received payments to meet their staff wages. Employers have the option to top workers’ wage subsidy payment up to near their full normal take-home pay.

Up to the end of April, 25,000 people who had originally found themselves out of work and who had signed up to the enhanced pandemic unemployment payment have now transferred to the temporary wage subsidy scheme. That points to a number of employers rehiring staff who they had originally been forced to let go.

However, 21,500 workers have moved in the other direction and are now claiming the €350 weekly unemployment payment.

Another feature of the Revenue figures is the number of older workers availing of the temporary wage subsidy. Close to 4,300 people over the age of 70 are receiving payments under the scheme.

Anyone over the age of 65 has been refused access to the pandemic unemployment basis and are being required to apply instead for a state pension which pays considerably less. However, they are entitled to the wage subsidy scheme if they remain on an employer’s books, even where they are working few if any hours currently.

Another 25,600 recipients are aged in their sixties, with an unknown number of these over the age of 65.

There has also been controversy over the decision to exclude mothers who had been on maternity leave in February but have since returned to work. As they were in receipt of social welfare in February and not on companies’ normal payroll, they are not eligible for the scheme.

Figures earlier this week from the Department of Employment Affairs and Social Protection showed that 591,000 are in receipt of the Covid-19 unemployment payment. In addition, there were around 205,000 people on the live register receiving regular job seeker payments.

1 Brown Thomas and Arnotts to cut 15% of jobs due to coronavirus crisis
2 Ivana Bacik opposes Bartra’s Ballsbridge shared co-living plan
3 Aryzta’s move to replace chairman prompts takeover speculation
4 Moving in and out of lockdown is a recipe for economic disaster
5 Shed Distillery in Leitrim to open €3m visitor centre next month
6 Eir customers lose sports content over contractual row with Virgin Media
7 47,000 homes need to be built each year to solve housing crisis, report says
8 US treasury forced to pay up to fund record stimulus
9 Two men face fraud charges over £1.2bn sale of Nama’s NI loans
10 ‘There’s something quite exotic for me still about Asia’
Real news has value SUBSCRIBE