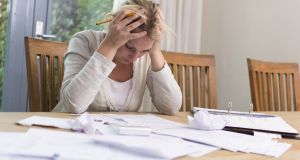 The April survey found that 69 per cent of women and 66 per cent of men said that they were worried about their personal finances. Photograph: iStock

Two-thirds of Irish adults are worried about their finances as Covid-19 wreaks havoc on the economy, with people aged between 45 and 54 living outside Dublin standing out as the most concerned, according to a new survey.

A poll of more than 1,000 people carried out by research firm Behaviour & Attitudes for Cork-based financial services firm BlackBee Investments found that one in six adults now classify themselves as “very worried”, with just 7 per cent saying that they are not at all concerned about their finances.

The firm also found that 30 per cent of adults had said in the middle of March, just as Europe was beginning to realise that it was becoming the new epicentre of the coronavirus outbreak, that they were hoping to invest in stocks in the next 12 months. However, a follow-up survey between April 7th and 14th found that the level of individuals considering dipping their toes in the stock market had slumped to 17 per cent.

While global markets have rallied strongly since then, BlackBee Investments chief executive David O’Shea said that this mainly reflects how extraordinary stimulus efforts unleashed by central banks globally in the past seven weeks have boosted financial markets – and that equities have yet to price in the damage Covid-19 will inflict on economies over the medium term.

“It’s the response of policymakers that’s driven equity markets. The amount of money that’s been pumped into the economy is off the charts, but it’s going to be a very different economy waiting for us when we emerge from this,” said Mr O’Shea. “I don’t think markets have caught up with where the real economy is going to go.”

The April survey found that 69 per cent of women and 66 per cent of men said that they were worried about their personal finances, while 72 per cent of people aged between 45 and 54 were in that category, compared to 57 per cent of individuals over 65. Geographically, the most worried people were based in Leinster, outside of Dublin, and Munster.