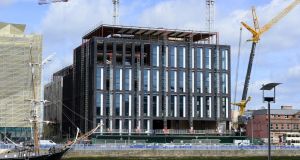 It’s expected that the increase to 6 per cent in commercial property stamp duty will result in an additional €376 million in revenue for the exchequer. Photograph: Cyril Byrne

The Revenue Commissioners has clarified how commercial property buyers who agreed to buy a property before October 11th can avail of the old lower rate of stamp duty.

Budget 2018 introduced a new, higher rate of stamp duty of 6 per cent; and, as noted in the Finance Bill 2017, published on October 19th, this new rate applies from the date of the budget, October 11th. However, for transactions where a contract was in place before this date, the lower rate of 2 per cent will apply provided that it is executed before January 1st, 2018.

Now those qualifying for the lower rate, because their property acquisition had reached an advanced stage before the budget, can ensure they avail of this rate in one of two ways.

Firstly, the buyer can file a return through the e-stamping system, pay stamp duty at the rate of 6 per cent and be issued with a stamp certificate. Once the Finance Bill is enacted – likely to be in December – the filer can then request a refund of the difference in the stamp duty paid between the 2 per cent and 6 per cent rates by amending the return and submitting the relevant documentation to Revenue.

Alternatively, buyers can avoid the higher rate altogether by filing their return and paying stamp duty at the rate of 2 per cent. While this means that they won’t be entitled to their stamp certificate, they should be able to get this in due course, as once the Finance Bill is enacted, Revenue says it will publish information on how the postponed stamp certificate can be obtained.

When it was first announced in the budget, the decision to triple the rate of stamp duty was met with some dismay by the property industry, with some arguing that it put Ireland at a disadvantage against other business centres, particulrly in the race for post-Brexit business.

London, for example, has a stamp duty rate of just 4 per cent, while in Madrid it is less than 2 per cent. However, the 6 per cent rate is still in fact lower than the rates levied in Paris (7 per cent) and Cologne (6.5 per cent), and is on a par with both Amsterdam and Frankfurt. And, as market commentators such as Cushman & Wakefield have noted, it’s unlikely to make investing in urban areas such as Cork or Dublin unattractive; where it might impact, however, is on values outside of these cities. It’s expected that the increase to 6 per cent will result in an additional €376 million in revenue for the exchequer.

The rise in stamp duty was also introduced alongside a more favourable decision to cut the capital gains tax exemption on investment property from seven to four years. It means that anyone who bought commercial property between 2011 and 2014, and held it for four years or more, will be exempt from capital gains tax when they sell. It is hoped that this measure might boost transaction levels in the property market – which of course will then also boost stamp duty revenues – even if it doesn’t quite boost supply.