Business Week: also in the news were the housing crisis, Shell and Apple in Athenry

Minister for Finance Paschal Donohoe played down expectations for the October budget in his Summer Economic Statement. Cliff Taylor of the Irish Times looks at the decisions the Minister faces 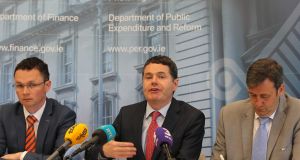 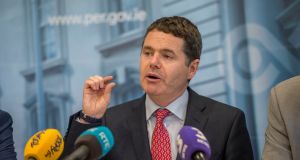 Minister for Finance, and Public Expenditure and Reform Paschal Donohoe explaining the limited fiscal space for tax cuts and spending in this year’s budget, at the launch of the Summer Economic Statement on Wednesday. Photograph: Brenda Fitzsimons / THE IRISH TIMES

The Government unveiled its annual summer economic statement on Wednesday, revealing that it’s not so much a pie to be divvied up in Budget 2018 but a cupcake – and the masses are hungry.

The scope for expenditure increases and tax cuts in the autumn will be about €300 million, said Minister for Finance Paschal Donohoe, alarming Government TDs who know there could be an election before there’s a chance to deliver another budget.

While the official fiscal space for Budget 2018 is €1.2 billion, some €900 million has effectively been spent on the carryover effects of the previous budget and the new public sector pay deal.

We already know that Taoiseach Leo Varadkar wants to cut income tax, and there is a proposal to merge the universal social charge (USC) with PRSI. But to complicate matters one of the key elements of Fine Gael’s confidence and supply arrangement with Fianna Fáil is that there be a 2:1 split between extra spending and tax reductions.

Donohoe declined to say whether the Government’s commitment to the split would apply to the remaining €300 million, which would leave just €100 million for tax cuts.

Of course, the Government may seek to fund cuts by raising taxes elsewhere. One way that has been mooted is the abolishment of the reduced rate of VAT for the hospitality sector, which could generate up to €500 million. There would, however, be uproar in the sector, which has been cheerleading the 9 per cent rate for years now.

Apart from that, the summer statement confirmed plans to set aside €500 million each year for the State’s new rainy-day fund from 2019 onwards, half the amount that was previously signalled.

The statement also forecast 55,000 new jobs next year, and economic growth of 4.3 per cent this year and 3.7 per cent next year.

It also noted that the State is still on target to reduce its budget deficit to zero next year, down from a post-crash high of 11 per cent.

The summer statement was published just days after the Republic got the formal nod of approval from euro zone finance ministers in the seventh round of its post-bailout inspection reports.

The report broadly endorsed the Government’s economic strategy, but urged fiscal caution, saying that although the prospects “remain bright, external risks are significant”.

NTMA chief executive Conor O’Kelly noted on Monday that the Government’s gross debt, at more than €200 billion, was 275 per cent that of its revenue, compared with an EU average of 165 per cent.

Varadkar’s wish to give something back to the people who get up early in the morning is all very fine, but there will be much disquiet on the Opposition benches if tax cuts are prioritised over the investment that is needed to solve the housing crisis.

Not to mention a development that could make matters worse: thousands of tenants in Dublin face an unwelcome extra bill this year as spiralling rents tip them above the €2,500 a month level at which a little-known 1 per cent stamp duty applies.

That’s another bill for many struggling families trying to hold on to the roof over their heads. As has been highlighted before, a lack of housing supply in the State is contributing massively to the problem.

On Thursday the chief executive of the National Asset Management Agency (Nama) linked the low level of residential development on sites sold by the agency to land hoarding. Brendan McDonagh said that since its inception Nama had disposed of land sites with the capacity to deliver 50,000 housing units. However, only 3,700 have been built or are under construction.

“There is no doubt that land hoarding is an issue,” McDonagh said. “For any given site there is little disincentive to hoarding as long as the owner expects house prices to rise.”

Then there’s the talk about axing the Government’s Help-to-Buy scheme for first-time buyers. The Construction Industry Federation warned this week that any move in that direction would make the housing crisis worse. The industry lobby group said the scheme meant banks were once again lending to builders who are constructing new starter homes. However, the scheme has been blamed as a major contributor to rapidly rising house prices in the past year.

Despite the doom and gloom, house-builder Abbey said it aimed to more than double its Irish house sales this year to levels not seen since before the State entered an international bailout in 2010.

Speaking to The Irish Times on Tuesday after the company posted better-than-expected full-year profits for the financial year, Charles Gallagher said the company “will probably do 80-plus” Irish sales this year. That compares to 39 last year.

Elsewhere, Grafton Group shares rose the most in four months on Tuesday as the builders merchanting and DIY group posted better-than-expected first-half revenues. Total like-for-like sales increased 5.9 per cent in the second quarter, bringing the figure for the first half to 5.7 per cent.

Separately, the Texas-based property investment group Hines said it was seeking planning permission for a new student accommodation block in Dublin after opening its fourth such facility in the capital on Wednesday.

Sources said that three partners behind the field – Shell, Norwegian oil and gas group Statoil, and Canada’s Vermilion Energy – had invested almost €4.3 billion in the project.

Shell is to sell its 45 per cent stake to a unit of the Canadian Pension Plan Investment Board in a deal that could be worth as little as €830 million to the company. The move brings an end to Shells’ involvement in one of the most controversial infrastructure projects in the history of the State.

In neighbouring Co Galway, the locals are less enthused in relation to the road blocks that have hit the construction of Apple’s proposed data centre in Athenry.

Apple announced plans in February 2015 to build the centre in Galway on the same day it unveiled plans for a similar facility in Denmark. The Danish centre is expected to go live later this year, but work on the project in Athenry has yet to be given the green light.

Following objections on environmental grounds, the matter is before the High Court, with a decision expected by the end of the month.

Galway businesses and locals are now worried about the project following an announcement that Apple is to build a second data centre in Denmark. It got worse 24 hours later when the company said another data centre was set for China.