American-Irish business forum to focus on trade between Florida, Ireland and Pennsylvania 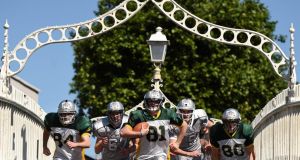 An American-Irish business forum focusing specifically on trade and enterprise between Florida, Pennsylvania and Ireland will take place in the run-up to the Croke Park Classic this weekend.

With more than 20,000 overseas visitors expected in Dublin for the game between Penn State and the University of Central Florida, the majority travelling from North America, the economy is set to benefit to the tune of an estimated €30 million.

The forum is taking place at the Croke Park conference centre on Thursday and will feature a number of high-profile speakers from both sides of the Atlantic, including Pennsylvania State University president Eric Barron, Diaspora Matters chief executive Kingsley Aikins, Zenith Technologies founder Brendan O’Regan and Peter Ryan, Irish consul general in New York. The forum will also showcase the best of Irish start-ups to the international business leaders, giving Irish entrepreneurs the opportunity to network with business and legislative leaders from Florida and Pennsylvania.

Lord Mayor of Dublin Christy Burke said the economic benefit from the Croke Park Classic and the various social, business and entertainment events surrounding the game were hugely significant to the country.

“It’s a wonderful platform to showcase what Ireland has to offer to the many tourists who are over for the game and all those watching on television around the world,” he said.

Croke Park stadium director Peter McKenna said a series of events would be taking place in the run-up to the game. These include the Unesco symposium on youth civil engagement and leadership through sport, the Gift high school games in UCD and cross-cultural and entertainment events in the Croke Park Classic fan zone in Temple Bar.

The Unesco event will develop a series of key policy directions and a major formal UN declaration on utilising sports and recreation as mechanisms for youth development worldwide.

1 Lockdown exit: How can Irish economy reopen without big health risks?
2 Coronavirus: The online scams, apps and trends you need to know about during the pandemic
3 Deliveroo branches into grocery deliveries in Ireland
4 Business owner waiting over a month for overdraft approval
5 Cold water poured on idea of ‘helicopter money’
6 Coronavirus: How Covid-19 may reshape the Irish retail landscape
7 Finance ministers gather as fears grow even the future of the euro zone is at risk
8 Why we should be slow to use tracking apps in coronavirus response
9 I want to change my will quickly in case I fall ill. Do I need a lawyer?
10 Q&A: Where do we stand on mortgage holidays and payment breaks?
Real news has value SUBSCRIBE