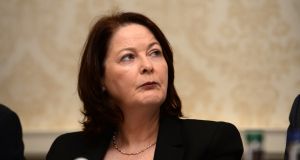 Margaret Sweeney’s appointment comes as the company’s founding chief executive David Ehrlich resigned to take up the role of president and chief executive of Capreit, the firm that set up Ires in 2014. Photograph: Dara Mac Donaill

Irish Residential Properties Reit (Ires), the largest private landlord in the Republic, has named Margaret Sweeney, the former head of airport operator DAA and Postbank Ireland, as its next chief executive.

Ms Sweeney’s appointment, effective from Wednesday, comes as the company’s founding chief executive David Ehrlich resigned to take up the role of president and chief executive of Canadian Apartment Properties Real Estate Investment Trust (Capreit), the firm that set up Ires in 2014.

Ires, which owns 2,450 apartments, was one of three Reits to float on the Irish Stock Exchange between 2013 and 2014, raising an initial €1.56 billion of debt and equity between them to buy up property on the cheap in a market where commercial real estate prices had plunged by more than two-thirds from their 2008 peak. Capreit continues to own an almost 16 per cent stake in IRES.

Mr Ehrlich will continue to serve on Ires’s board, succeeding Thomas Schwarz as the nominee of Ires Fund Management. Capreit provides asset management and property management services to the Irish company.

Ms Sweeney, who has served as an independent non-executive of Ires for the past year and a half, is also currently on the boards of Dalata Hotel Group and HSBC Institutional Trust Services (Ireland).

The new chief executive “has very extensive knowledge of the company from her time as a direct and chair of the audit committee,” said Ires chairman Declan Moylan.

Ms Sweeney previously worked with accountancy firm KPMG for 15 years before joining DAA in 1996. She remained with the airport operator until 2004 before being appointed as chief executive of Postbank Ireland, a joint venture between An Post and Belgian bank Fortis, in January 2007.

However, the lender was wound down at the end of 2010 as the wider banking industry was engulfed by the financial crisis.

Meanwhile, Ires lost an appeal earlier this month against a decision refusing it permission to build some 450 apartments in Sandyford in south Dublin with high demand for new homes. The company is now expected to submit a scaled-back plan for the development of 350-400 units at the site.