Galway rugby grounds to be sold for high-density housing 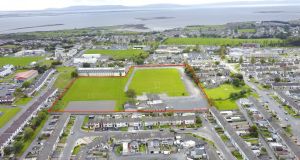 The Galwegians rugby grounds on the outskirts of Galway city looks set to be used for high-density housing after it is offered for sale by private treaty.

Joint agents DNG Maxwell Heaslip & Leonard and O’Donnellan & Joyce are quoting “a minimum sales price in the region of €6 million” for the 9.76-acre Crowley Park on the Dublin Road, which could accommodate at least 150 houses. However, a considerably higher density may be permitted, subject to planning permission, because of the scarcity of development sites in the city.

The site fronts on to the old Dublin Road, directly opposite the Bons Secours Hospital, a few hundred metres from GMIT and Galway’s new Garda station.

Crowley Park has been home to the Galwegian club since 1963. A previous agreement to sell it in 2007 for about €25 million fell through when the club failed to secure planning permission for a suitable alternative venue. The club now plans to acquire grounds extending to about 15 acres on the west side of the city, where it will provide modern facilities for its fast-expanding membership.

James Heaslip of the selling agents said the sale of the grounds offered great potential at a time when Galway had a “huge issue” over the lack of available housing.

City authorities had actively sought lands such as this for development, and he said he had no doubt the site would fit the requirements for high-density development.

4 Should I buy an investment property or save for my dream home?