Exclusive plot on 0.9 acres that was home to Chester Beatty Library 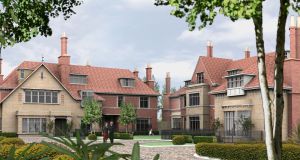 A housing site about to be offered for sale on Dublin’s most exclusive road is expected to set a new record for residential land values in the city.

Selling agent CBRE is guiding in excess of €10 million for almost an acre on Shrewsbury Road, previously occupied by the Chester Beatty Library and now available with full planning permission for seven large three-storey over-basement houses.

Six of the seven houses will have four bedrooms plus a study; the seventh will have three bedrooms along with a study. To add to the luxury, the main bedroom suites will range in size from 34 to 46 sq m (375 to 500 sq ft).

The plans also call for a large basement containing private garaging rooms for each house and further general parking.

The houses will have enclosed front gardens bounded by wrought-iron railings and gates opening directly into the town square. Each house will have a private garden to the rear.

The form and design of the buildings has been influenced by the work of the early 20th-century “Arts and Crafts” architects, and in particular the large private residences introduced by Edwin Lutyens and Charles Voysey.

The characteristic trademarks of these architects – complex roof profiles, elongated chimneys, projecting bays and dormers, mullioned ribbon windows and a variety of traditional features – can be identified in the design by McCrossan O’Rourke Manning.

The large houses on Shrewsbury Road and neighbouring Ailesbury Road, many of them designed in the “Arts and Crafts” style, are also referenced in the design of the development.

The decision to sell the Chester Beatty site is expected to mark the end of one of the longest running planning sagas. It began in 1999, when the Galway developers O’Malley Homes bought the much-coveted site of 0.9 of an acre for €9.14 million. O’Malley was originally refused permission for 13 apartments but later received approval for seven units.

A subsequent application to vary the permission to allow the same number of apartments in a two- and three-storey building was also given the green light but, when O’Malley later opted for a four-storey block to accommodate the seven apartments, it was again met with a refusal.

The developer finally changed tactics and went for seven high-quality houses. A five-year extension of the planning permission dates from March 2014.

Peter Garrigan of CBRE said it was extremely rare for a development opportunity such as this in Dublin 4 to go for sale on the open market “We believe this exceptional opportunity will appeal to both domestic and international bidders.”