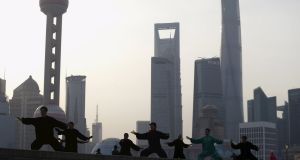 People perform Tai Chi on the Bund in front of the financial district of Pudong in Shanghai, China, March 25, 2016. REUTERS/Aly Song 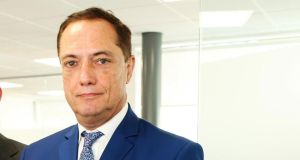 Richard Barrett, the former Treasury Holdings boss who has been an on-off Shanghai resident for 12 years, is now focusing on a suite of start-ups with his new company, Bartra Capital. These include a crowdfunding project that taps into the growing demand in China for overseas property.

With another Treasury alumnus, Cormac Doddy, Barrett has co-founded HengXinLi, an online platform designed to provide Chinese investors with access to property in major international cities, including in Ireland, for a minimum amount of $2,500 (€2,218).

He is also backing a spin-off dotcom called Know Your Customer, which speeds up the process of meeting anti-money-laundering requirements.

Despite China’s slowing economy, Barrett is bullish on Shanghai’s prospects.

“Shanghai is big and bold. You can get anything you want here. The restaurants are as good as New York or London; everything is here. Shanghai is going to become the financial capital of Asia. Beijing is the political capital, but Shanghai will be home to the multinationals and big Chinese companies. That’s how they are arranging the deckchairs here,” he says in an interview at a Xinjiang restaurant in the city.

The eatery’s speciality is a whole lamb cooked on a spit, a classic of ethnic Uighur cuisine, but the setting is upmarket and many of the diners are rich Shanghainese. The place is emblematic of a changing China, where traditional ways of doing business are giving way to a more contemporary approach.

In Shanghai, with its crowded streets, neon lights, and cranes dotting the skyline, you get little sense of the Chinese economy registering its lowest growth rates in a quarter of a century. The economic slowdown is regional, and some areas, especially in the poorer west of the country, have been badly hit by flagging exports and the impact of reform.

Barrett says the slowdown is real, a sign of how the economy is changing. This is, after all, the new normal the government likes to talk about, the switch from old-style manufacturing to industries with more of a value-added element.

“You see it in the luxury stuff. You were seeing it in residential sales. You can clearly see it in manufacturing, like these old industries,” says Barrett.

Fearful of pyramid schemes, the Chinese government has had an ambiguous relationship with crowdfunding, but it is gradually opening up to it. In a recent speech to launch the government’s work report, premier Li Keqiang spoke of building “a synergy of business start-ups, innovation and the Internet Plus”.

“Platforms will be created for crowd innovation, crowd support, crowdsourcing and crowdfunding, and mechanisms will be built to encourage new types of business start-ups and innovation-making through co-operation between enterprises, institutions of higher learning, research institutes, and makers,” Li told the country’s annual parliament, the National People’s Congress.

“I originated the idea having witnessed the enormous growth in outbound investment by Chinese institutions and wealthy individuals when I was with DTZ,” says Doddy. “Crowdfunding is a serious player in the capital market, and will exceed venture capital this year at $34.4 billion (€30.5 billion) globally. Venture capital is running at about €27.4 billion.”

Meanwhile, personal investable assets in China are expected to reach 144.6 trillion yuan (€19.83 trillion) this year, of which only 12 per cent is in the hands of the truly affluent, who are worth more than a billion yuan. Of that 12 per cent, just 8.7 per cent have invested overseas, says Doddy.

“There is $21 trillion (€18.9 trillion) in savings on deposit in China,” he says. “This is now liberated by the introduction of social welfare contributions. People no longer need to keep all these savings for security.”

In June last year, the country’s largest commercial property company, Dalian Wanda, raised five billion yuan (€680 million) in funds from its crowdfunding app and its 99Bill subsidiary in just three days. With a minimum investment of 1,000 yuan (€137), investors received a share of the rental fees from the company’s Wanda Plaza shopping malls and other sources.

Investors are keen to look outside China, which is now expensive and hard to get into. In January, home prices in Shanghai were up by more than 15 per cent from a year earlier, according to the National Bureau of Statistics. And while domestic property is looking expensive, there is no recourse in the stock market – the Shanghai composite has dropped by about 45 per cent since its peak in June.

“We are the only company in China currently offering overseas property through crowdfunding, and the government is actively opening the currency and internationalising the yuan,” says Doddy. “We have a pipeline of institutional-grade assets in the US and London, with plans this year to invest in other European capitals as well as Australia, Canada, New Zealand and Japan.”

Doddy is also co-founder, with Barrett and tech wizard Claus Christiensen, of Know Your Customer, which promises to cut through red tape when companies are trying to take on clients.

“All firms are subject to anti-money-laundering legislation globally, and while legislation in each jurisdiction may differ slightly, the common theme throughout is that the identity of the customer must be verified,” says Maria McDermott, director of corporate affairs and head of compliance at HengXinLi.

The app photographs your ID and utility bills and then charges your credit card $1 to verify your address. A report is generated in real time and uploaded securely to the compliance officer, who can immediately verify the customer.

Since the heady days of Ireland’s economic boom, Mayo native Barrett has operated numerous businesses in China and the wider region, including Forterra Trust, which emerged from Treasury Holdings and from the sale of which he trousered an estimated €40 million.

In Ireland, he’s set up Relm.ie, a loan fund/loan arranger in conjunction with former AIB executives Dave Renwick and Paul Dowling, which specialises in property lending in UK and Ireland.

Barrett says there is no overlap between his Chinese and his Irish business, except that the crowdfunding will be extended to Irish properties, including his plan to build public housing.

Shanghai holds a particular place in his heart. In recent years, Barrett has been busy in the stock market here and also putting money into Chinese companies. Now his focus is on leveraging his local knowledge with his new companies. This also involved studying Mandarin at Jiaotong University in the city, including learning how to write in Chinese, a real challenge.

“I felt a right eejit not being able to read the signs or read a menu. You have to do it right,” he says.