Prime pitch on Cork’s premier shopping street for €6.6m plus 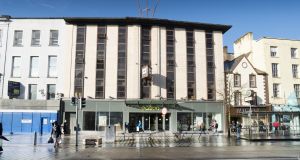 Eason & Son is taking a new 25-year lease of the premises on St Patrick’s Street in Cork city.

Agent Bannon is seeking offers in excess of €6.6 million for a landmark building on Cork city’s most sought-after thoroughfare, St Patrick’s Street.

No 113-115 St Patrick’s Street has been occupied by the well-known bookseller and stationer, Eason & Son, for more than 33 years. The company is taking a new 25-year lease of the premises subject to a market rent of €500,000 per annum. This promises the building’s prospective purchaser an immediate return of 7 per cent net of costs.

Internally the ground and first-floor retail areas are open-plan and underwent a complete refurbishment in 2013.

St Patrick’s Street has long been recognised as Cork’s foremost shopping district. Eason’s neighbours include a number of premium high street brands such as Brown Thomas, Tommy Hilfiger and Pandora, together with a wide array of local, national and international retailers including Penneys, Dunnes Stores and Lifestyle Sports.

Alexandra Patterson, who is handling the sale on behalf of Bannon, said: “This investment opportunity is likely to appeal to a range of local, national and international investors given its prime position on St Patrick’s Street, large retail floor plates and established tenant.”