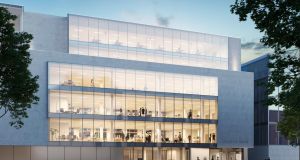 Kildress House has been designed to the highest specification

Small to medium-sized companies seeking a location within Dublin’s central business district may be interested in Kildress House, a new grade A office building which is due for completion in December of this year.

Savills has been appointed to lease the 22,000sq ft building in advance of its delivery by Tyrone-based developers McAleer & Rushe, and is quoting a rent of €55 per sq ft.

Located on Pembroke Row between Lower Baggot Street and Wilton Place and just across the Grand Canal from Upper Baggot Street and Burlington Road, Kildress House is surrounded by a range of major international employers, including LinkedIn, Amazon, Fitbit and Shire.

The building is also within walking distance of numerous cultural and lifestyle amenities such as St Stephen’s Green, the Bord Gáis Theatre, the National Gallery of Ireland and Aviva Stadium. Dining options are also plentiful, with 38 restaurants and cafes within a five-minute walk.

Kildress House has been designed to the highest specification, and will offer flexible and efficient floor plates across its six floors suitable to a wide range of office occupiers.

It also has excellent changing facilities, with showers for those cycling or running to work, and includes secure bicycle storage. In terms of its sustainability, the property will have a BER A3 energy rating.

Developers McAleer & Rushe have been active in the Dublin market for over 40 years. Their current Dublin projects include the new Maldron Hotel at Tara Towers, and a 301-bedroom hotel at Bow Lane which is due for completion this summer.

Kellie O’Brien of Savills says: “It is unusual to find a new building in the city centre of this size. Kildress House offers small to medium sized companies the opportunity to occupy a self-contained building of the quality normally only available to large occupiers.”