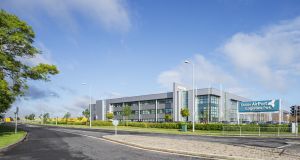 Australian-headquartered furniture and electronics chain Harvey Norman and airline catering specialist Gate Gourmet have committed to 110,000sq ft (10,200sq m) of speculatively-built warehouses in the park on long-term leases at rents understood to be between €9.25 and €9.50 per square foot.

While the success of DALP has been driven by the quality of the buildings delivered by Rohan Holdings, its location is widely acknowledged within Ireland’s logistics sector as being unrivalled. The scheme is located less than a two-minute drive from the M50 and the country’s wider motorway network, 250m from Dublin Airport’s campus, and 2km from the Dublin Port Tunnel.

To date, Rohan has secured blue-chip operators for some 750,000sq ft (about 70,000sq m) of high-bay distribution space at DALP alone. In choosing to locate at the scheme, Harvey Norman and Gate Gourmet will be joining a number of other leading brands, including DHL, Holland & Barrett and Gilead.

Quite apart from the newly-constructed 30,000sq ft Condor House facility now available for letting at the Dublin Airport scheme, Rohan is progressing with the delivery of three new units of 40,000sq ft, 50,000sq ft and 70,000sq ft respectively. These are all expected to be completed by early to mid 2020. With build cost inflation currently running at 8-9 per cent per annum in Dublin, rents for the new units are expected to range from high €9 to mid €10s per square foot (depending on size).

Elsewhere in its industrial portfolio, Rohan completed two speculative warehouse/office units of 20,000sq ft at its M50-fronting North City Business Park earlier this year. It is understood plans for three additional units of between 20,000sq ft and 40,000sq ft are now at an advanced stage. Work is expected to get under way once Rohan Project Management completes the current work to enhance access to the park on to the M2 motorway in early July.

Elsewhere in the capital, Rohan is understood to be in discussions with a number of occupiers for bespoke design-and-build projects at its South West Business Park scheme next to the Kingswood junction on the N7 Naas Road.

Commenting on Rohan Holdings’ recent industrial and warehousing activity, the group’s newly-appointed head of asset management, John Casey, said: “Over the last number of years Rohan has witnessed an increasing focus, from both local and international operators, for well-designed and specified facilities in premium and properly managed locations.

“This demand is primarily driven by three segments of occupiers: new entrants to the market who cannot afford to be in a secondary location or unit; existing operators who are expanding or consolidating operations and will realise the economic value of efficient high-bay space; and occupiers of secondary units that are facing a rent review or lease termination event where a longer-term investment in their warehouse space is now justifiable or indeed necessary.”