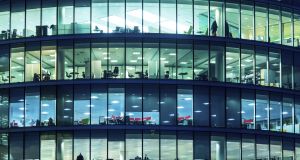 “This is a significant improvement on 2017, which saw an increase of 30 per cent in serviced office space in Dublin, or 3,000 extra desks,” says Shane Duffy of Click Offices. “Further growth is expected in 2019 with 6,500 new desks already announced.

“Companies want short-term, fluid agreements which allow them to upscale or relocate rapidly. Not only that, they want to move in quickly and have all facilities automatically provided for them on arrival. That’s why we’re now seeing large multinationals such as Facebook and Microsoft opting for flexible workspace in the city. It’s no longer just start-ups or SMEs that are looking for this option.”

The average monthly price of a desk in Dublin, according to Click, has remained steady at €500 per desk while desks at the lower end start at €300. Desks in many of the larger, more modern spaces start from €650 per month.

A global shift towards serviced offices, co-working and hot desking started in the US more than a decade ago but has only recently gone mainstream in the Irish market.

WeWork, for example, opened four serviced office centres in Dublin last year at North Wall Quay, George’s Quay and Harcourt Road. It looks set to expand its presence in Dublin this year by opening two new office spaces in the city centre, bringing its capacity to more than 8,000 desks.

Kenneth Dwyer, sales manager with Regus, says people and businesses of all sizes are “waking up to the financial and strategic benefits of serviced offices”.