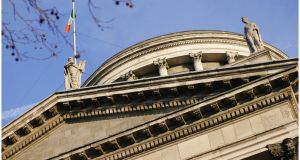 The Four Courts: judge allows some of Belfry funds actions to go ahead.

A High Court judge has permitted hundreds of damages actions by investors in the Belfry property funds promoted by Allied Irish Bank to go to a full trial on some, but not all, of the grounds advanced.

Mr Justice Robert Haughton’s preliminary ruling concerning whether the claims were statute-barred affects more than 300 actions over the Belfry funds.

The investors have sued over losses sustained after they put money into five Belfry funds, which invested in commercial property in the UK.

The investors allege the funds were promoted between 2002 and 2006 by the bank and by five directors of various companies in the Belfry Properties group, including property investor Tony Kilduff and former head of AIB private banking John Rockett.

The cases were initiated following the collapse of the funds. The plaintiffs claim the defendants were negligent and acted in breach of contract and in breach of fiduciary duty in the manner they operated the funds.

The claims are denied. The defendants also argued the claims were statue-barred on grounds including they were brought more than six years after they entered into the Belfry Investments.

The investors rejected those arguments.

In his lengthy judgment, Mr Justice Haughton ruled the investors claims of alleged failure to advise them about aspects of the funds known as a loan to value (LTV) covenant before they invested are not statue-barred.

It is claimed these covenants permitted assets which the fund had invested in to be sold if their value fell below a certain amount. These asset sales, it is claimed, occurred as prices plummeted during the recession.

The investors alleged failure by the defendants to specify or explain the LTV covenants or the possible consequences of such covenants before investors put their money into the funds.

The judge, who based his decision on eight test or pathfinder cases, found other categories of the claims were brought outside the statue of limitations and the permitted six-year period.

Those aspects include claims the defendants were negligent in the management and choice of the investments, the rotation of the properties and the generation of excessive fees.

The judge also ruled claims the defendants were negligent arising from alleged shortcomings in the various fund’s prospectuses, and over advice given about the investments suitability and financial risk, were also statute-barred.

After the judgment, solicitor Tom Casey, representing the majority of the investors, said his clients were delighted with the court’s decision. Some 30 investors were in court for Mr Justice Haughton’s ruling.

While the court had found certain elements of the claims are statue-barred, the claims can now proceed to a full hearing before the High Court, he said.

The judge adjourned the matter to next month to allow the parties consider his ruling.