Plans to renovate and upgrade hotel approved by An Bord Pleanála 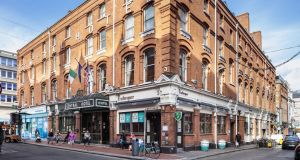 One of Dublin’s oldest inner city hotels, the Central Hotel on Exchequer Street, may be extensively renovated and upgraded after it is offered for sale at the end of next month.

In the meantime, estate agent Cushman & Wakefield is hoping to attract offers of about €40 million for the 130-year-old hotel, which has secured Bord Pleanála approval for a considerable number of structural modifications and, most importantly, an increase in the number of bedrooms from 70 to 112.

New owners will also be allowed to enlarge the Library bar on the first floor, create a central courtyard, and install a basement restaurant.

Even with only 70 bedrooms and a three-star grading, the Central reported a profit of €1.7 million in the past year and had additional revenues of €660,000 from five retail outlets on the ground floor, including the Medipharm chemist at the junction of Exchequer Street and South Great George’s Street.

The hotel has had an impressive 88 per cent bedroom occupancy rate in the past year when overnight charges averaged €125.

The prime location of the hotel within easy walking distance of most city centre attractions has ensured that it is constantly busy and frequently booked out.

The shortage of hotel accommodation in the city generally may well prompt the next owner to proceed immediately with the enlargement of the hotel.

The Central is owned by the Gerry Conlon-led Bridlewood Family Trust and was originally designed by Richard Millar and William Symens, who were responsible for the architecture in the former House of Parliament on College Green, now owned and occupied by the Bank of Ireland.

Four of the five tenants trade on short-term leases in the expectation that these premises may form part of the new hotel layout once it has been redeveloped. The exception is Blas Deas, trading as Honest of Goodness, which has a 35-year lease on Dame Court from 2012 with no break options.

The hotel will be sold by public tender on November 30th.