The Quartz building in Dublin is a seven-storey over-basement office building that extends to 6,533sq m of net internal area 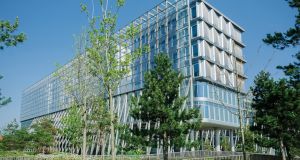 In a world riven with uncertainty, Aviva looks set to proceed with the marketing process for a prime headquarter office investment at Elmpark Green, Dublin 4.

Aviva’s plan for the disposal of The Quartz building on behalf of its Friends First Irish commercial property fund is understood to have been in train for several weeks now, and as such predated the current turbulence. The subject property is being offered to the market by joint agents Knight Frank and Lisney at a guide price of €28 million.

The Quartz comprises a seven-storey over-basement office building that extends to 6,533sq m (70,320sq ft) of net internal area, with 76 car spaces at basement level. The property is fully leased to Willis Towers Watson Insurances (Ireland) Limited on a 20-year lease from July 2015.

The current rent of €1,518,218 per annum (€232 per sq m /€21.60 per sq ft) is considered by the selling agents to be highly reversionary and is subject to an open market rent review in July this year. In comparison, the neighbouring Seamark building in Elmpark Green which was recently finished is currently quoting rents of €376 per sq m (€35 per sq ft).

A vacant two-storey “shell and core” annex building will also form part of the sale. Extending to 953.30sq m (10,261sq ft), this building sits underneath The Quartz and comes with an active grant of planning permission for conversion to office use.

The Allianz House deal was executed just eight weeks after it was brought to the market by agent TWM at a guide price of €50 million. The sale price of €53 million reflected a net initial yield of 5 per cent.

Built in 2007 at an overall cost of €550 million by developers Bernard McNamara, Jeremiah O’Reilly and the late David Courtney, the overall 17.3-acre mixed-use Elmpark Green scheme is home to a number of leading corporate tenants, including Willis Tower Watson and Novartis, along with residential and leisure uses.

Elmpark was acquired in its entirety by Starwood, for €184.3 million in 2016. Having secured ownership the US-headquartered real estate investor moved to sell its interest in 201 apartments at the Dublin 4 complex to Ires Reit for €59 million, before selling Allianz House for €58 million to Standard Life shortly after.

While news of Aviva’s plan to dispose of The Quartz building comes within the context of the current challenging environment, three weeks ago Bloomberg reported the company had been approached by investors interested in assets held by one of its frozen Irish property funds.

Aviva halted withdrawals in January from its Friends First fund and its Aviva Irish Property Fund, which had combined assets under management of about €940 million. The move sparked concerns about the potential for wider problems in the sector.

Before locking the funds Aviva switched the funds’ pricing to a disposal basis which pushed down their value by just over 9 per cent in both cases. The change indicates an intention to sell property at some point, although Aviva at the time said the Friends First fund had no plans to sell property “due to liquidity concerns” .

Aviva’s Friends First Irish Commercial Property Fund already had two properties at various stages of the sales process before it halted withdrawals, the company had said.

A source quoted in the Bloomberg report suggested Aviva might look to sell another property this year to finance investment of other assets within its Irish commercial real estate portfolio.