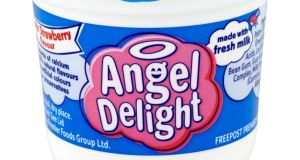 Angel Delight is making a comeback half a century after the whipped dessert first hit the shelves.

Sales of the brand jumped 30 per cent over the six months to the end of September, according to its maker, Premier Foods, as consumers were tempted back by a new ready-to-eat version of the milky dessert, first launched in 1967 by Bird’s.

“Angel Delight, one of the group’s smaller and historically less heavily invested brands, grew by 30 per cent in the period, benefiting from the launch of convenient ready-to-eat pots,” the company said.

In its traditional form, which is still available, consumers whisk milk into the Angel Delight powder, which comes in strawberry, chocolate, banana and butterscotch flavours.

The resurgence of Angel Delight reflected a broader trend in Premier’s first-half results, as consumers opted for products that were designed to be eaten “on the go”.

Other brands owned by the group include Ambrosia, Mr Kipling and Oxo.

Mr Darby said a strong performance in the second quarter, with sales up 6.2 per cent, helped to offset a “challenging” first quarter. He said expectations for the full year were unchanged.

1 Over 400 complaints from migrant workers at meat plants lodged with WRC
2 Avoca warns of redundancies due to coronavirus
3 Staff at Dublin and Cork airports to vote on work practice changes
4 Moving in and out of lockdown is a recipe for economic disaster
5 NordicTrack S22i Studio Cycle: An expensive way to cut down on the cabin fever
6 How to . . . screen record on your phone or laptop
7 Musgrave acquires Belfast-based Drinks Inc for undisclosed sum
8 Coronavirus: We must save lives but we also need to live
9 Billie Jean King, Sheryl Sandberg and others on how to close the gender pay gap
Real news has value SUBSCRIBE