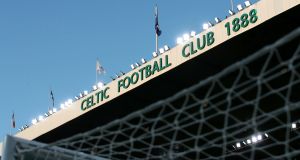 Celtic are set to be awarded the Scottish title with clubs due to vote before the start of next week. Photograph: Steve Welsh/PA Wire.

The Scottish Professional Football League aims to crown Celtic as champions and relegate Heart of Midlothian after April 23rd, the earliest date Uefa is willing to accept for the abandonment of top divisions.

A meeting between the league’s board and clubs on Wednesday resulted in the recommendation of a resolution for a vote in each of the four divisions on whether to end their season as it stands, with places allocated on an average points-per-game basis.

Nine of the 12 Premiership clubs would need to vote in favour, and the SPFL, having canvassed opinion, is understood to be fully confident of it passing. Votes will be collated before the start of next week.

A subsequent delay in abandoning the top-flight campaign would then be expected in order to follow Uefa guidance. The European game’s governing body has warned of possible restrictions to Champions League and Europa League entry if member associations abandon seasons prematurely. The SPFL does not regard that as a serious risk but is anxious not to antagonise Uefa.

The Hearts owner, Ann Budge, has spoken of legal action should the league demote her club, who are four points adrift with eight games to play. Rangers have publicly spoken out against any early finish to the campaign and did so again on Wednesday afternoon.

“It is abhorrent that certain clubs could be unfairly relegated if the current SPFL proposals were implemented,” read an Ibrox statement, which added: “The consequences of forcing through change without due care and attention will have severe consequences for the Scottish game.”

Rangers insist “the 2019-20 season is only complete when all 38 games have been played to a finish”.

Under the average-points plan, only Hibernian and St Johnstone - currently sixth and seventh respectively - would change places.

Dundee United will be promoted to Scotland’s top division if Championship clubs pass their element of the resolution. That element may hold the key to the SPFL’s plans, with several clubs considering their options. It also irked Championship boards that the league issued a statement as their occasionally feisty round of talks were ongoing.

The bottom two divisions are expected to back an immediate end to their seasons, with 15 from 20 needing to agree in a combined vote. Brechin City, otherwise consigned to a play-off to save their spot in League Two, would be saved.

One glimmer of hope for Hearts - and Partick Thistle, who would be relegated from the Championship - came in an SPFL statement. “If the resolution is approved, the SPFL has also committed to consulting with clubs over the possibility of league restructuring ahead of season 2020-21,” it read. That prospect, primarily of a 14-team Premiership as mooted by Budge on Wednesday, is currently viewed by insiders as remote.

Numerous clubs across Scotland have been keen for the season to be defined so as to release prize money, issued on the basis of placings.

Neil Doncaster, the league's chief executive, said: “We are keen to work with Uefa and remain in discussion with them over the situation in Scotland. The quicker we reach a final position the better.”

Clubs were informed of a necessity to start the 2020-21 Premiership season on the first Saturday in August, as part of Sky Sports’ new and exclusive live television deal. That campaign has therefore been granted priority, even though there is no guarantee of football in early August.

The Scottish FA hopes to complete the 2019-20 Scottish Cup, currently at the semi-final phase, possibly as the opening games of “next” season. Aberdeen, fourth in the Premiership, would have a possible route to the Europa League only via the cup but it is understood they could instead be put forward by the Scottish FA on the basis of league position. - Guardian

EFL could introduce artificial crowd noise in behind closed doors games 19:24
Trainer Halford eyes up Guineas glory with Sinawann and Ridenza 19:01
Hogan sees Macgiloney and Cafe Con Leche as Galway Festival challengers 17:39
How Mary Pierce stepped into the light and played for herself 17:00
Odion Ighalo’s loan stay at Manchester United drawing to a close 14:43

1 Ken Early: Liverpool fans, Bamber Gascoigne and a close shave in Istanbul
2 How Mary Pierce stepped into the light and played for herself
3 Tiger shines and Brady bites back as charity match proves an enjoyable release
4 Sideline Cut: Vignette shows why Bird is the true shark in The Last Dance
5 Coronavirus: Leinster cancel sale of season tickets for 2020-21
Real news has value SUBSCRIBE
Crossword Get access to over 6,000 interactive crosswords