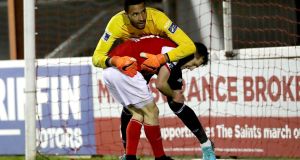 Derry City limbered up for this weekend’s trip to Oriel Park with their sixth win on the spin, defeating Bohemians at a blustery Brandywell.

While the win was certainly a deserved one, the game was turned on its head five minutes into the second half when Paddy Kavanagh was shown a straight red card for a horror challenge on Derry’s Ronan Curtis.

Three minutes later, Derry move back into the lead when Rory Patterson was in the right place at the right time to drive the ball home after Rory Hale’s blistering drive had been superbly parried by Bohs ‘keeper, Shane Supple.

Derry had opened the scoring in the 20th minute when Aaron McEneff drove a low shot beyond the reach of Supple as the Bohs defence stood off the midfielder.

That said, Dylan Watts drew the teams level six minutes later when he was sent scampering clear by Kavanagh, the scorer producing a superb chip over the head of the advancing Ger Doherty.

With Patterson having netted three minutes after Kavanagh’s red card, the home side huffed and puffed but failed to put the game to bed, Bohs refusing to give up the ghost.

However, two minutes into injury time, man of the match, Nicky Low, got the deserved winner when he broke free to round supple and send Derry into third spot and a boost before this weekend’s trip to Dundalk.

An early Ryan Brennan goal was enough for St Patrick’s to deservedly avenge a defeat at the RSC back in February as Waterford finished with nine men at Richmond Park.

It marked a second successive away defeat for the highflying visitors as the Inchicore side made it a third home win on the bounce.

As manager Alan Reynolds watched from the stand - serving his one-match ban - Waterford confirmed on the night that they will be appealing the respective six and four match suspensions handed out to midfielders Stanley Aborah and Bastien Héry following red cards in their recent win over Cork City.

Having lost without the influential pair in Derry on Friday, they were missed again last night as St Patrick’s edged proceedings in the centre of the park.

Incensed earlier at not being awarded a penalty when Dean Clarke appeared to be fouled by Garry Comerford, the home fans’ ire was sated when their side got what proved the game’s only goal on 15 minutes.

Darragh Markey floated a delightful diagonal ball into the penalty area for fellow midfielder Brennan to glance a header past Lawrence Vigouroux.

Jake Keegan then wasted an opportunity to double the lead 11 minutes later, blasting his penalty wide after Sander Puri had hauled him down in the area.

If that was a reprieve of sorts, Waterford’s hopes of getting back into the game suffered a blow five minutes after the break when Estonian international Puri received his second yellow card for diving and was sent off.

And it got worse on 73 minutes when Waterford were reduced further, Gavin Holohan receiving a straight red for clattering into Markey.