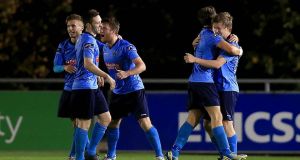 Airtricity League side UCD will benefit from Ireland’s standing in the Uefa Fair Play rankings to take a place in next year’s Europa League. Photo: Donall Farmer/Inpho

First Division side UCD are set to play in next season’s Europa League after the Airtricity League was awarded an extra place in the competition due to Ireland’s standing in the Uefa Fair Play League.

The table - which is calculated on the basis of the behaviour of association’s international teams, club teams in Uefa competitions and fans - was topped by the Netherlands with England coming in second place and Ireland third.

Despite a third place finish in the Irish Fair Play league UCD will still avail of the extra place as Dundalk - who topped the table - and St Patrick’s Athletic - who came in second - are already in European competitions due to their league finishes.

For UCD to compete in the qualifying stages they will need to be granted a licence while they also must have a manager with a Uefa Pro Licence.

The last time the Belfield club competed in Europe was in 1999 when they played in the Inter Toto Cup.

This looks to be the last time an Irish club will benefit in such a way from Fair Play rankings as a change to Uefa Fair Play regulations will see teams awarded prize money from next season.

West Ham United are on course to take the English fair play slot in the competition, with Everton and then Burnley in line behind them.

Liverpool currently top the Premier League’s fair play table but are set to qualify anyway, meaning Sam Allardyce’s side are the likely beneficiaries.

Meanwhile, TG4 will broadcast live coverage of Ireland’s clash with Itlay in the Uefa European Under 17 Championship at 1.50pm on Sunday.

The channel will also have live coverage of Ireland’s last group stage match against England on Wednesday.

Tom Mohan’s side began their campaign yesterday with a scoreless draw against Holland.