Brandywell stalemate does nobody any favours 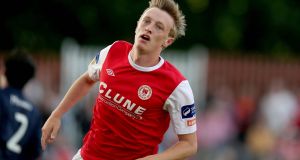 Derry City were held to a second successive scoreless draw after a toothless clash with an equally poor St Patrick’s Athletic at the Brandywell.

Both teams came into the match level on points and desperately seeking victory but neither had that cutting edge in the final third.

It was the second scoreless draw for both teams with the Saints now five league matches without a win and with chances of securing European football fading fast.

From a free-kick wide on the left St Pat’s Jamie Lennon floated a cross towards the back post where Luke McNally headed over the crossbar on 18 minutes.

James Akintunde, who netted on his City debut in the 2-0 win in Inchicore last month, had a gilt-edged chance to break the deadlock on 23 minutes.

Following a throw-in on the right, Darren Cole crossed low into the penalty area but Akintunde didn’t strike his effort cleanly and Brendan Clarke saved.

Ciaron Harkin caught Chris Forrester late on the halfway line and the Saints playmaker reacted furiously, sparking a melee between both sets of players as frustrations spilled over. Both Harkin and Forrester went into the referee’s book for their troubles.

Stephen Mallon raced onto Conor McCormack’s searching pass and skipped past the challenge of Lee Desmond but the Belfast man’s left-footed effort from eight yards went straight into the hands of Clarke on 38 minutes.

The visitors kept possession well, culminating in a decent effort from Forrester from 25 yards which sailed over the Peter Cherrie’s crossbar just before the hour mark.

Lennon found Georgie Kelly at the near post with a free-kick but the striker’s deft flick was turned behind by Cherrie with 15 minutes to go as Pats looked likeliest to find a breakthrough.

Saints sub Jason McClelland came so close to finding the net on 81 minutes as his curling free-kick from 20 yards brushed the side netting.

Walter Figueira had a chance to test Clarke after coming off the bench but he drilled his shot harmlessly into the hands of the Pat’s goalkeeper.

Figueira fired a shot into a crowded six-yard box during added time but neither side deserved to win this match.