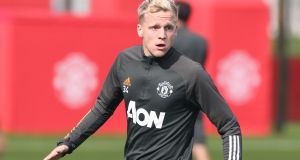 Everton (8) v West Brom (20), 12.30pm – Live BT Sport 1
Everton are down to just two fit centre backs after Jarrad Branthwaite was ruled out for up to five weeks with an ankle injury. With Mason Holgate already sidelined by a toe problem which could keep him out until the end of October manager Carlo Ancelotti is left with just Michael Keane and Yerry Mina for the positions in central defence.

Midfielder Alex Iwobi is back in contention after a minor knock but Ancelotti, who made 10 changes for the midweek win over Salford, is likely to recall all his first-choice players including the likes of James Rodriguez, Allan and Abdoulaye Doucoure.

Matt Phillips and Conor Townsend could be in West Brom’s Premier League squad for the first time this season. Both players missed the opening-day defeat to Leicester – Phillips with a back injury and Townsend due to an ankle problem – but they each featured against Harrogate in midweek in the Carabao Cup. Baggies boss Slaven Bilic has signed young midfielder Conor Gallagher on loan from Chelsea in time for the match on Saturday but fellow new recruit Branislav Ivanovic is still building up his fitness. Ahmed Hegazi (hamstring) and Kenneth Zohore (calf) remain doubts.

Leeds (13) v Fulham (19), 3pm – Live BT Sport 1
Leeds captain Liam Cooper is hoping to make his first appearance of the season. Cooper missed the opening-day defeat at Liverpool and the midweek Carabao Cup exit to Hull, but is fit to return after a calf injury. Marcelo Bielsa, who has no new injury worries, will revert back to his strongest line-up after making 11 changes on Wednesday night. Bielsa confirmed club record signing Rodrigo, who made his first start against Hull, will be among the substitutes.

Former Chelsea full-back Ola Aina is in line for his first appearance since joining Fulham on a season-long loan deal from Torino.

Crystal Palace boss Roy Hodgson is set to keep faith with the team which earned an opening-day victory over Southampton. The Eagles made 10 changes for the midweek Carabao Cup clash at Bournemouth, with only Jeffrey Schlupp starting from the weekend win, as they looked to avoid any more injuries. Palace remain without Nathan Ferguson (knee), Gary Cahill, James Tomkins (both hamstring) and Patrick Van Aanholt (shoulder), but Mamadou Sakho, Jairo Riedewald, Christian Benteke and Connor Wickham have returned to fitness although are not deemed match-fit.

West Ham will check on the fitness of captain Mark Noble after he missed training on Friday with a toe injury. The midfielder has had an injection and boss David Moyes will hope to have him available. Jack Wilshere is also back in training after an ankle injury but is not expected to start against his old club.

Tottenham will assess their squad after their gruelling Europa League trip to Bulgaria on Thursday night. José Mourinho should be able to freshen things up if he needs to after leaving eight players at home, with Dele Alli and Toby Alderweireld among those who did not travel. Japhet Tanganga is out with a thigh injury, but Serge Aurier will hope to shake off a training knock.

Brighton will hand late fitness tests to Adam Lallana and Ben White ahead of the trip to St James’ Park. Midfielder Lallana limped out of his Albion debut against Chelsea on Monday evening, while defender White had his first top-flight appearance cut short by an ankle problem. Goalkeeper Christian Walton (ankle) and long-term absentees Florin Andone and Jose Izquierdo remain unavailable to Albion boss Graham Potter.

Chelsea (3) v Liverpool (6), 4.30pm – Live Sky Sports
Hakim Ziyech, Ben Chilwell and Thiago Silva will all miss out for Chelsea. The new recruits must wait for their league debuts for the Blues, with Ziyech still nursing a knee complaint, Chilwell a heel issue and Silva searching for match fitness. Christian Pulisic is still to shake off a hamstring problem, but striker Timo Werner is fit, having eased past a dead leg picked up at Brighton on Monday.

Liverpool manager Jürgen Klopp will have to wait to give Thiago Alcantara his debut as the signing of the Bayern Munich midfielder was not completed in time. Klopp, however, has had a full week of preparations and reported no new injury worries after Saturday’s thrilling win over Leeds. Klopp is likely to name the same matchday squad, although Fabinho is set to return to starting line-up at the expense of Naby Keita.

Leicester (2) v Burnley (10), 7pm – Live BBC One
Jonny Evans remains out for Leicester as he serves the second of his three-game ban. James Maddison was fit enough make the bench in Sunday’s 3-0 win at West Brom after recovering from a hip injury and will be assessed over whether he can start. Wes Morgan is available after returning to training, Filip Benkovic remains out and Ricardo Pereira is over a month away from returning from an Achilles injury.

Burnley defender James Tarkowski is being assessed after missing Thursday’s Carabao Cup tie against Sheffield United with a toe problem. Johann Berg Gudmundsson is unavailable having sustained medial ligament damage in his knee during the tie. Ben Mee (thigh) and Jack Cork (ankle) and Ashley Barnes are out although Barnes is set to feature for the under-23s next week.