Andre Wright steers Bohemians back to winning ways in Sligo 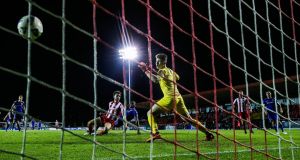 Bohemians put back-to-back league defeats behind them to return to winning ways at the Showgrounds in Sligo on Friday night.

Andre Wright got the crucial goal as Keith Long’s side secured a hard-won three points to reignite their pursuit of leaders Shamrock Rovers.

Wright stabbed home from close range with just 10 minutes left but the visitors displayed an attacking mindset from the off, with the impressive Dawson Devoy forcing a great save from Ed McGinty inside five minutes.

It set the pattern for the early exchanges as the visitors laid siege on the Rovers goal at times but couldn’t force a way through.

The closest they came was when Kyle Callan-McFadden somehow lopped the ball off the line and over his shoulder when a Danny Grant effort looked certain to break the deadlock.

In the second half, Ronan Coughlan broke onto Junior Ogedi-Uzokwe’s pass on the hour-mark for the home side but dragged his shot across the face of goal.

At the other end, Wright saw goalkeeper McGinty deflect his low shot onto the post on 66 minutes, but he finally got the better of the recent Irish under-21 call-up with 10 minutes left, as he met Devoy’s cross at the near post and poked the ball to the net.