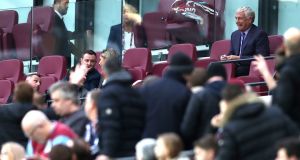 It was a fortnight before the UK’s Brexit vote when government minister Michael Gove said that people “had had enough of experts”. It was another half-truth in a country split in two.

Less than a month before, one such expert had been discussing West Ham United and their impending move from Upton Park to a stadium built for the 2012 Olympics and then, well, something else. He wondered if any plan accounted for disappointment.

Simon Inglis wrote one of the great sports books in 1983, The Football Grounds of Great Britain, and while others focused on what West Ham 2016 gained from their move to the London Stadium, Inglis instead thought about what would be lost. “Intimacy”, was the perhaps surprising word he settled upon.

“Fundamentally, the move will change the nature of West Ham United,” Inglis said, with the accuracy of an expert.

“It might be a good thing but they are giving up a club rooted in a community of streets, pubs, the market, the Tube station; they’re taking a leap from that intimacy.”

Being experienced, professional and considered, Inglis had visited the Olympic stadium, measured sight-lines and understood the new place in the context of the old one and English football culture in general.

Having visited so many grounds, Inglis knew that they were more than terraces and seats and design. They were those too, of course, but they were also personal and collective experiences. He wrote of fondness, excitement, enthusiasm, things that are difficult to quantify but which are real.

When, for example, Trevor Brooking talked about being two feet away from West Ham fans when taking a corner, he was providing a literal and metaphorical gauge. Both he and they knew the value of it.

Today Brooking would be 20 yards away. As Inglis said, that brings a change in the nature of the relationship. It should not make the same West Ham players less effective, but it might.

True, the club would make money from the move and many more supporters would be able to attend. There might even be the seeds of a new fanbase planted. Plus, Upton Park was hardly an architectural wonder.

But – “fundamentally” – this would not be the West Ham United of the Boleyn Ground, Green Street, 1904-2016. It would be a different club, one renting its premises.

That would be forever intolerable to a section of the support, but others would be more flexible, see additions as well as losses. What would ease a transition was the performance on the pitch. That would always matter more than the quality of seats or the catering.

As Inglis wrote in the second edition of his book in 1987: “Everywhere there is talk of ‘family entertainment’, but the majority of the people on the terraces just want to watch good football. That alone must remain the football club’s priority.”

It seems odd that such an obvious statement needed to be made, but it is a useful reminder now. In Dmitri Payet West Ham have recent knowledge of the benefits of talent.

There are still those, particularly in the administration of football, who do not. They see the game as a piece of their industry rather than its raison d’etre.

That view finds ways to justify historic change. Look at Arsenal, a club that gave up its home, Highbury, for what? The economic capacity to pay Arsène Wenger £8 million a year? In what football ways have Arsenal improved since leaving Highbury?

But they’re gone, and the compensation needs to be material, on the pitch. But it isn’t – and it isn’t at West Ham either.

The stadium is a problem for Arsenal who, amazingly, are prepared to insult their own fans with preposterous attendance figures. And it is a problem for West Ham, whose supporters feel distant.

It can be written off as nostalgia but it mattered at Upton Park, and nearly every ground, when fans scattered ashes and began to leave mementoes. This was long before the age of gush.

Individual commitment was sincere and common, so that it became collective. Grounds were called home because people felt at home. They were home to some of the best days of your life, became part of the rhythm of so many lives.

Upton Park may not have been the HQ of some spectacular success, but it was occasionally, just as most grounds are. Supporters are willing to accept that; they do not think they are on some unending upward trajectory. The scoreline tells them otherwise.

A portion of the West Ham fanbase, maybe even some in the boardroom, thought the London Stadium would be the start of the club’s evolution into a great European power, but plenty were worried about what would go.

One of them was co-owner David Gold. Born at 442 Green Street, opposite Upton Park, Gold asked: “Do I really want to go? This is my life. These are my memories.”

Gold had previously dismissed the Olympic stadium as “ridiculous” because there was no plan for it post-2012.

Then West Ham saw a rare mix of opportunity and money.

In exchanging a home for a venue, the hope was the venue would in time become a home. But for the transition to be smooth, the loss of intimacy and familiarity would need to be offset by compensations on the pitch.

Instead Payet went, Slaven Bilic went, now heads have gone. The future looks uncertain, people return to the past. A plan would definitely have helped.

West Ham’s next match, in a fortnight, is back at the London Stadium against Southampton. It has assumed huge importance given the two clubs are just above the relegation zone.

They must both wonder how it has come to this, West Ham with 57,000 for a game against Burnley and Southampton a model of profit and development for others to follow.

Southampton have sold lots of players, frequently to Liverpool, but they have quality and experience within their squad and finished eighth last season – a fourth consecutive top-eight place.

The Saints have not had the same angst about their move from The Dell to St Mary’s, though there are an increasing number of empty seats. Apathy might be the menace.

With just eight games to go, Mauricio Pellegrino has been sacked and Mark Hughes employed. Hughes was recently dismissed by Stoke, so Southampton are taking a gamble. This at a club where an 80 per cent buyout in August cost £210 million.

You would think that would buy a better plan than this.

Munster cruise past Ospreys on a dead rubber day at Thomond 15:47
Real Steel sees off stablemate Footpad at Thurles 15:36
14-man Saracens on the brink of last-eight after edging Racing 92 15:50
Class is permanent for Lee Westwood as he claims Abu Dhabi title 13:43
Saracens accept Premiership relegation and issue apology 11:05