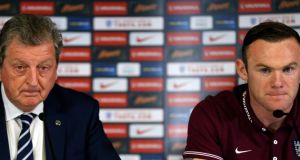 England’s manager Roy Hodgson and his captain Wayne Rooney talk at a press conference ahead of their international friendly at Celtic Park, Glasgow. Photograph: Reuters.

Wayne Rooney has talked to the younger members of the England squad to warn them about the atmosphere at Celtic Park and ensure they are not intimidated in the friendly against Scotland.

The England captain has taken players like Raheem Sterling, Ross Barkley and Saido Berahino to one side after admitting the din whipped up by the home fans can “take you by surprise”.

England have not played in Glasgow since 1999 and confront a resurgent Scotland who have lost only once – away to the world champions, Germany – in 10 matches under Gordon Strachan.

Rooney has visited this arena twice with Manchester United in European competition and is ready for an awkward evening.

“I’ve spoken to a few of the younger players to make sure they are ready for the start of the game because, if you are not, it can take you by surprise,” Rooney said. “Everyone knows this stadium. The fans here have a great reputation of making it an intimidating place to come.”

Hodgson will grant Berahino a senior debut at some stage, with Fraser Forster expected to start in goal, Stewart Downing to play some part and Luke Shaw to be drafted in at left-back. Chris Smalling is likely to partner Gary Cahill in the centre of defence, replacing Phil Jagielka, with England hoping this fixture offers a more realistic gauge of their post-World Cup progress than what has proved a weak Euro 2016 qualifying group to date.

“I’m expecting to see a classic game,” said the England manager. “We are playing teams in qualifying who maybe accept we have the better players, so they seek to restrict their attacking movements in order to frustrate us. In this game both teams have the quality to aspire to win. It will be different to the games against San Marino and Estonia, when defeat wasn’t our major concern but scoring goals might have been.”

Strachan concurred. He described his own side’s 1-0 qualifying win over the Republic of Ireland last Friday as “frantic” rather than aggressive.

“The game has changed completely in the last 30 years,” he said. “You cannot kick lumps out of people anymore. If someone elbowed you in the past you’d just wipe the blood away from your face and get on with it. But that kind of intimidation in football is completely gone.

“On Friday, people went toe to toe. There was an intensity there but there wasn’t a piece of nastiness in it at all. Nobody was backing down and that’s what happens when two teams lock horns and don’t want to get beat. It was just people who were scared of getting beat and wouldn’t give an inch. The main focus of the Scottish people over the last two months was that game the other night. This is a game to be enjoyed.” Guardian Service

Cronin and Powell’s contrasting doping sanctions; Greenwood nets again for United 07:14
Solskjær says Greenwood can ‘go as far as he wants to’ 06:49
Game Changers: The Irish brother who became the Godfather of Kenyan running 06:16
Contrasting sanctions for James Cronin and Robert Powell difficult to reconcile 06:00
GAA yet to receive any complaints from clubs about county teams’ activity 06:53

1 Contrasting sanctions for James Cronin and Robert Powell difficult to reconcile
2 Dave Hannigan: Notre Dame’s Fighting Irish leprechaun needs its ass kicked
3 Game Changers: The Irish brother who became the Godfather of Kenyan running
4 Masters plan for November shows Augusta National is out of touch
5 Solskjær says Greenwood can ‘go as far as he wants to’
Real news has value SUBSCRIBE
Crossword Get access to over 6,000 interactive crosswords