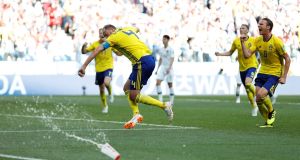 There is a feeling with VAR that all it is doing is replacing one sort of controversy with another. In days gone by, Swedish fans would have railed against the non-award of a penalty for Kim Min-woo’s lunge on Viktor Claessen and the rest of the world would rapidly have forgotten and moved on. But now, in this happily technological age, South Korean fans can rail against the eventual award of a penalty for the same challenge as the rest of the world rapidly forgets and moves on.

Should it have been a penalty? Maybe. Kim’s challenge was forceful and followed through into the Krasnodar winger but he did seem to get a toe to the ball first. That makes the decision subjective and a judgment call for the Salvadorean referee Joel Aguilar. He had given little impression in the rest of the game that he was an official whose judgment was necessarily to be trusted, but he was in an excellent position not more than seven or eight yards from the incident. If his instinct was that it was not an offence it’s hard to know what he could possibly have seen on the replay to make him change his mind.

But he did, and Andreas Granqvist converted the penalty, giving Sweden a win that had always seemed likely to eventually go their way, if only because South Korea were so passive.

There are some games so uneventful that their uneventfulness itself becomes heroic. It wasn’t that this was dull, as such, because there was an unexpected degree of needle, perhaps provoked by the spying scandal that erupted in the buildup as a Sweden coach, Lars Jacobsen, attended South Korea’s closed training camp in Austria - not realising, he said, that it was not open to the public. Happily for him, it was open to anybody staying in a nearby house that conveniently overlooked the training ground and so, to combat that, the South Korea coach, Shin Tae-yong, had his players switch numbers in the belief that, as he put it, “it’s very difficult for westerners to distinguish between Asians.”

Shin, perhaps, was worrying unnecessarily. Whatever his big secret was, it remains a mystery, impenetrable to anybody who endured this festival of hard-running shape maintenance. Perhaps he’s waiting to unleash it on Mexico or Germany; perhaps it was all just an enormous bluff. There was no sleight of hand here, no subtlety, no disguise, nothing that wasn’t thoroughly predictable. South Korea worked hard with Koo Ja-cheol sitting very deep in midfield, and looked to attack on the break through Son Heung-min or Hwang Hee-chan on the flanks. They played, in other words, exactly as they had in qualifying, with just as little flair and penetration.

In terms of nothingness, though, the game failed. It came close to setting a new record for eventlessness but, as 19:59 passed into 20:00, a square ball across the box found Marcus Berg unmarked eight yards out. The Al Ain forward’s shot struck the thigh of the advancing goalkeeper Cho Hyeon-woo, an unexpected selection ahead of Kim Seung-gyu, and bounced to safety, but the point was that it was a shot. Had the game gone just another 59 seconds without a shot, it would have equalled the post-1966 World Cup record set in Brazil four years ago by the Netherlands’ quarter-final against Costa Rica. As it was, though, it slunk unmourned into the netherworld of second, neither eventful nor uneventful enough to be significant.

Sweden fans on Sunday had seemed undecided whether they should join the general glee at Germany’s defeat by Mexico or not. That was not how they had envisaged a possible path to the last 16 opening up. But the fact is now that if they can avoid defeat against Germany on Saturday they could be in a position in which a draw against Mexico in their final match takes both sides through. Modern technology has delivered a very old-fashioned possibility.