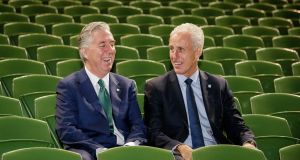 Republic of Ireland manager Mick McCarthy is adamant that the political crisis which that engulfed the FAI over the past month will not impact on his ability to do his job.

The 60 year-old, who was at the Aviva stadium on Wednesday to promote the association’s Sports Direct backed summer soccer school programme, said that he would carry on regardless of what happens or who runs the association until it actively interferes with his work. So far, he said, that has not happened.

“It would appear to me that the consequences are that things are changing but not with the football,” he said. “I’ll turn up and we’ll go to Portugal (for next month’s training camp), and unless someone tells me we can’t go for financial reasons or we can’t play here (Lansdowne Road) because they’ve shut it, I am going to continue to do the job I’ve been employed to do and I’ll continue doing it in the way I do it.”

Asked whether he is concerned for John Delaney, McCarthy was a little non-committal but made it clear that he does not see himself as having worked for the former chief executive alone.

“My contact with John has been minimal. I’ve spoken to him on the phone, of course, about any issues we’ve had; not issues, but any things that needed to be discussed and if I’ve anywhere to go, to support any initiatives like this - but that’s for the FAI. It’s not John, it’s the FAI.

“I worked closely with him during the first stint; I’ve only been (back) here since the first of December. But I work for the FAI. There’s not been one boss; there’s been 11 people on the board who were party to my being employed. If one of them leaves, I’m still employed by the FAI board. The board are still there and operating so I’m being employed by them.”

On whether Niall Quinn might be a good fit to succeed Delaney, McCarthy said he simply does not know. “Quinny was chairman at Sunderland for a while, so he’s been involved in the administration of football. He’s very bright; he’s a mate of mine. Would that make it the right decision? I’ll leave it to other people.

“Whether it’s an ex-footballer or anyone else, I’ll support whoever gets it, just like I supported John and whoever else by doing my bit, by coming to things like this and trying to win football matches.”