Ken Early: Quiet McCarthy does his talking on the pitch in Lille

During and afterwards, the midfielder gave sense of how much Ireland really means to him 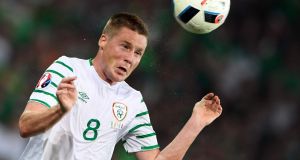 James McCarthy during Ireland’s match against Italy. “Team-mates, family, friends, they were there for me and picked me up.” Photograph: Miguel MedinaI

There is in football an institution called the mixed zone, which is actually two carefully divided zones with a railing running down the middle. The players walk past on their way to their bus and the journalists on the other side try to get them to stop and talk about the game.

Some players like talking in the mixed zone, others like to walk. Someone like James McCarthy doesn’t talk much, and when he does talk he doesn’t say much. His signature mixed zone phrase is “water off a duck’s back”, a line of versatility that McCarthy can use to dismiss almost any question.

He talks in cliches partly as a defensive measure against having his words twisted. He has learned that journalists can’t always be trusted. But the main reason is simply that he’s an introverted person. He’s not that comfortable talking to people he doesn’t know. That’s just the way some people are.

Introverted players are disadvantaged by the mixed zone. There are some players who actually enjoy speaking to journalists, even when they have no idea who they are. These players might be naturally friendly and gregarious, they might be manipulative and political, they might just be silly and vain.

Journalists tend to like the players who talk to them. You end up hearing and reading more about these players. The introverts find themselves featuring less in the general conversation around the team.

There are also times when it works against them. One such instance would be James McCarthy and the recurring question over how passionate he is about playing for Ireland.

Apparently all the heat McCarthy had to take over his original decision to play for Ireland isn’t enough to confirm his bona fides. We need regular reaffirmation. Unfortunately, neither his economical style of play nor his quiet personality is particularly demonstrative.

To take a counter-example, nobody would ever doubt James McClean’s passion for Ireland. Whether furiously chasing down a player he believes has just fouled him and got away with it, or trading insults with Northern Ireland fans on social media, McClean’s passion is the most obvious thing about him.

McClean is the exception rather than the rule. Most Irish supporters love seeing the pride he takes in representing his country, but few international players draw as much energy from national feeling. Usually their motivations are more personal, but just because they are less conspicuous doesn’t mean they don’t exist.

In Lille on Wednesday night, McCarthy spoke in the mixed zone for an unprecedented 10 minutes, and gave us more of a sense of how much this team really means to him than he ever had before.

He had just played very well in a game few people had expected him to start. Martin O’Neill had two matches’ worth of compelling evidence that McCarthy was way below his best and couldn’t get to grips with the tournament.

O’Neill ignored the evidence and went with his conviction instead: I don’t care about those games, I believe this is a player I can trust. It was a brave decision by the manager that paid off for the team.

You could be critical and say it’s easy to speak after a big win. Where was McCarthy after that nightmare against Belgium?

Well, he walked through the mixed zone that day with his head down, not speaking to anybody. But what was there to say? He could have grovelled and self-flagellated, but what would have been the point?

McCarthy doesn’t find it easy to speak to the media at any time. He felt he could stop and talk after the Italy game because he knew he had already said all the important stuff out on the pitch.

“The feeling when we scored, it’s hard to describe it,” he said. “The family were over watching it, family back home as well. After especially the days building up to the game, the Belgium result. Obviously myself at fault for a couple of goals. I’m just delighted to be back involved.

“I knew it wasn’t acceptable. It wasn’t good enough. I was gutted. But my family were constantly on the phone, making sure everything was fine. Team-mates, management. They’ve all stuck by me.”

“It’s been a long few days to be honest, after the Belgium game. For the two goals, it wasn’t acceptable, it wasn’t good enough. I was hard on myself, rightly so. But I’m delighted the gaffer stuck with me. We showed good character tonight. A lot of people doubted us. We stuck together, we made sure nobody was left hanging out to dry.”

It was more than McCarthy had ever spoken about himself. You could tell he felt awkward about it by the way he kept interjecting phrases like “but it’s not about me, it’s about the team”.

Some players have no such hang-ups. But to see McCarthy’s pride and relief after Italy was to understand that just because a player happens to be introverted doesn’t mean he doesn’t care.