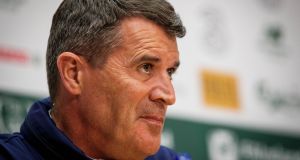 Republic of Ireland assistant manager Roy Keane: “We know it’s going to be difficult. But it’s still a good game if you put yourself in some of the players’ shoes.” Photograph: Ryan Byrne/Inpho

The games will be seen more as an opportunity for some of the fresher faces to catch the manager’s eye, but Roy Keane reckons Ireland’s more established players need to deliver in the games against France and the USA.

“After the Turkey game, while I was disappointed at the loss I was more disappointed with the senior players than the new lads who were finding their feet. You want more from them because they are setting the tone, whether it’s in training or by how they play in the games.

“Lads who are new, you’ve got to give them a bit of a break. It took me 20-25 games to find my feet at international football. We’re talking about young lads going to Turkey from the Championship. They need a helping hand along the way.”

Some of those who featured in Antalya are out of the trip to Paris. Sean Maguire, who played 90 minutes in Glasgow last week, is ruled out of both games by a hamstring problem. Scott Hogan is one of four players set to figure in the Championship playoff on Saturday, and has not been called in by Martin O’Neill, at least for now.

The absence of the pair leaves Ireland shorthanded in attack for the game at the Stade de France but, asks Keane with a grin: “How many strikers do you need for France? We have Jon, we have Shane Long, and James McClean has played up the middle. We are not going to be playing with five up front.”

Walters, he admits, might be forgiven for being especially anxious to play in Paris given the frustration he has had during the season at Burnley. But having only featured five times for the Premier League outfit since joining last summer – and not played at all since coming on in a cup game at the start of January – Keane suggests the 34 year-old might well find Monday night a particular challenge.

“He’s probably fed up with the amount of minutes that he has had at Burnley. But then again, he has had a few injuries this season, and Burnley have done well. When we go to France we want to be fair to Jon because we are going up against a French team that is going to the World Cup. The idea that Jon is not playing regularly – or not playing at all – but turns up here, and we just say ‘go on Jon, do the business’…they are big demands on him.”

Keane admits the game may well prove a major challenge for quite a few of the Irish players who are actually playing regularly given the very different circumstances in which the two sides go into it.

“Funny enough, I bumped into Gordon Strachan the other day in the airport after the [Celtic] game, and he was talking about Scotland playing France maybe two years ago when they were on their way to the Euros, and I think France beat them 3-0 but how it could have been 15.

“So, yeah, it’s difficult to play the game when the incentive is there for them to leave on a high for a tournament. We know it’s going to be difficult. But it’s still a good game if you put yourself in some of the players’ shoes. You’d want to play in this game; it’s a good opportunity for them.”

Graham Burke, he suggested, would do well to make the step up, although he insisted he was happy enough with the way the Dubliner performed at Parkhead. “You knew he was playing,” he said.

And while Colin Doyle seems set to start again, Shane Supple is in with an outside chance of featuring at some point nine years after walking into Keane’s office at Ipswich and announcing he wanted to go home.

“It’s nice to see him,” says the former midfielder. “He seems a really nice lad. You’ve got to admire him. Sometimes you make decisions, and he seems to have no regrets.”

For the French, meanwhile, the game is the first instalment of a three-match send-off, but there will be one or two of Didier Deschamps’ players who will be going into it off the back of a disappointing season.

“He’s a good player,” Keane says when asked about Paul Pogba. “But would he probably feel he could have had a better season? Probably. Usually the good players are quite critical of themselves, and I’m sure if he was sitting here he would probably think he could have done better.

“When you play for Man United and you don’t win a trophy you probably would be critical of yourself. But I like him, I think he’s a good player, a good kid. He probably needs better help around him; you’re on about good influences around the training ground. That’s where you need – good examples.

“I was the luckiest man on the planet when I was a player. I always had good lads around me, senior players who led by example. Pogba probably doesn’t have that at United...It’s just my opinion.”

On the Champions League, his opinion is that Real Madrid will win. “Because of Ronaldo,” he suggests, “but I wouldn’t begrudge Liverpool. I think Liverpool are playing some good stuff.”

The FAI, meanwhile, has confirmed the dates of the four Euro 2020 games to be played in Dublin, with the Group E games scheduled for June 15th, June 19th and June 24th, and the one round-of-16 match to take place on June 30th.

Clare ease into action with 16-point thrashing of Carlow 18:03
Kilkenny give an early glimpse of their power to see off Dublin 17:53
Five-star Mark Wood sets England towards Wanderers win 17:45
John Heslin strikes at the death to see Westmeath past Clare 17:35
Man United find respite in the mud as they hit Tranmere for six 17:32

1 Six Nations: A 21st-century tournament that saw Irish rugby come of age
2 Owen Doyle: Creeping professionalism of schools rugby a threat to the game
3 In Donegal Michael Murphy is seen, simply, as a godsend
4 Six Nations: Ireland are contenders but England still the team to beat
5 Mike Catt hopes to have Irish backs purring in Six Nations
Real news has value SUBSCRIBE
Crossword Get access to over 6,000 interactive crosswords