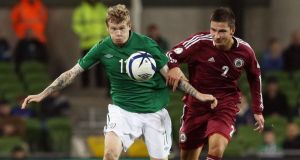 Martin O’Neill’s hopes that one or two of his players might have learned from past experience and steer clear of controversy on social media has proven to be short-lived, with James McClean taking to twitter yesterday to denounce the Belfast Telegraph as a “bitter sectarian paper,” whose journalists are “bigots”.

The Wigan winger was replying to a light-hearted tweet from a friend relating to an article in the paper marking the 20th anniversary of the Republic of Ireland’s dramatic World Cup qualifier against Northern Ireland at Windsor Park in which it was mentioned that ballads were played on the visiting team’s bus on the way to the ground.

The player did not seem to be taking issue in any way with the article in question but he does have what might be regarded as “history” with the newspaper which described him as a “turncoat” around the time he signed for Sunderland and declared that his international future lay with the Republic rather than Northern Ireland, which he represented at underage level.

While the FAI declined to comment officially on the McClean tweets yesterday it is believed that the matter will be dealt with internally and that, in future, there will be a ban on Twitter activity on match days.

1 Getting behind the rotten core of rugby with Dan Tuohy
2 Irish squad in the dark as clouds hang over Six Nations
3 Ryan Baird scores a hat-trick as blue wave rolls over Glasgow
4 Football fan survey: Manchester United still top the league among Irish fans
5 Football fan survey: Almost half of Irish adults say they support a club
Real news has value SUBSCRIBE
Crossword Get access to over 6,000 interactive crosswords