Croatia cruise into last 16 and will now face Denmark 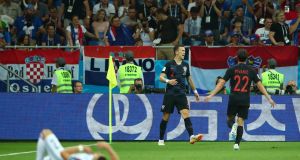 For the briefest of moments the Icelandic dream had flickered. Gylfi Sigurdsson had shown the kind of courage that has come to be associated with his country when he stepped forward to address a 76th-minute penalty, having missed from the spot in the previous tie against Nigeria.

This time he found the roof of the net and, when news filtered through of Marcos Rojo’s 86th-minute goal for Argentina that put them 2-1 up against Nigeria, the equation was suddenly tantalisingly simple.

Iceland needed one more goal. A 2-1 win would have sufficed. It would have taken the smallest nation to compete at the World Cup finals into the knock-out stage. They had the time to get it and momentum was with them.

Reality would intervene with a painful thud. Croatia, already qualified, had rested players and played largely within themselves, although they had roused themselves in the second half. In stoppage time Ivan Perisic fastened on to a pass into the area and, with ice-cool composure, banged his shot into the far top corner.

Croatia advanced with maximum points into a last-16 meeting with Denmark. For Iceland, there was pride but devastation.

Iceland had grown into the game after a slow opening quarter, which was marked by Birkir Bjarnason being bloodied by a stray elbow from Marko Pjaca. Bjarnason was forced off for about five minutes to undergo repairs. Pjaca was booked.

Their threat came from set-pieces and Aron Gunnarsson long throw-ins but they also pieced together moves of promise and no little thrust. They had a purple patch of chances before the interval and, when none of them went in, it was easy to wonder whether they would live to regret it.

Alfred Finnbogason robbed the dawdling Milan Badelj on 41 minutes and, after he swapped passes with Gylfi Sigurdsson, the shooting opportunity opened up. Finnbogason took it on first time. He whistled it inches past the near post.

Iceland’s fans had summoned the thunderclap to drive on their players but they did not get the breaks leading up to half-time. When Croatia could only half clear a corner, the ball broke to Bjarnason in a glorious position. Could this be the moment? His connection was clean but it was blocked by a combination of Duje Caleta-Car and the foot of the goalkeeper, Lovre Kalinic. Gunnarsson also shot accurately for the top corner only for Kalinic to make a diving save.

Zlatko Dalic’s sweeping changes had been anticipated but the surprise inclusion in his lineup was Luka Modric. The captain played to the right of central midfield in a 4-1-4-1 formation and the idea was that he would control the tempo. Dalic’s only other first-choice selection in the starting XI was Perisic on the left.

Croatia offered little as an attacking force in the first half with their efforts summed up on 20 minutes when Vedran Corluka found himself facing the wrong way – 10 yards or so outside the Iceland area. He had options if he could have turned but he played the way that he was facing – all the way back. Did Croatia have the urge or the desperation to force the issue?

They were much more threatening in the second half and they might have taken the lead when Badelj’s shot from distance deflected off Ragnar Sigurdsson and rattled the crossbar.

Iceland felt a couple of sucker punches in the moments that followed. First, Victor Moses equalised for Nigeria, which was not good for them, but worse was to come. The Croatia incision came from the left-back Josip Pivaric and it was a sharp one.

His cross from inside the area on the left deflected and it sat up for the advancing Badelj. He still had plenty to do but the technique and timing of the finish was excellent. He turned slightly side-on and was able to get over the ball. Hannes Halldorsson was powerless.

Iceland continued to push and they created further chances. Ragnar Sigurdsson saw a header tipped over the crossbar before he sent another one, having risen unmarked to meet a corner, against the woodwork. Bjarnason also sliced horribly when well placed from Finnbogason’s cross.

Heimir Hallgrimsson went for broke, replacing the centre-half Ragnar Sigurdsson with the forward Bjorn Sigurdarson, and his team equalised from Gylfi Sigurdsson’s penalty after his cross had hit the arm of the Croatia substitute Dejan Lovren. Hope surged. Perisic would snuff it out. – Guardian service

1 David Clifford sends everyone back to their corners unbeaten
2 Six Nations: A 21st-century tournament that saw Irish rugby come of age
3 Six Nations: Ireland are contenders but England still the team to beat
4 Limerick roar from behind to sink Tipp and start league in style
5 James Durcan steals a draw for Mayo in Ballybofey
Real news has value SUBSCRIBE
Crossword Get access to over 6,000 interactive crosswords