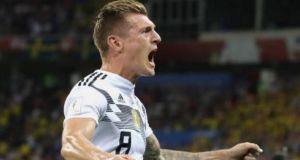 Toni Kroos had to blot out the background noise and, boy, was there a lot of it. The build up to Germany’s second Group F match against Sweden on Saturday night had been full of loathing, full of recrimination, and nobody in Joachim Low’s team had been under any illusions as to the consequences of failure.

Germany are simply not supposed to lose World Cup games, particularly not the opening one of the group stage, and the fall-out from the 1-0 defeat by Mexico from the previous Sunday had been extraordinary.

Some of the criticism was personal, and the squad had come to believe that a section of their countrymen and women wanted them to fail, wanted them to lose to Sweden and exit the finals.

It is probably worth reminding ourselves that it had been one defeat. Yes, it was particularly grisly, a meltdown that had hinted at the end of the Low era, but it was still only one defeat. In his eight previous tournaments, including the Confederations Cup, Low has always reached the semi-finals, at least.

The last time Germany had failed to advance from the first round of a World Cup was in 1938. Perhaps it explains the intolerance of any slip so early in a competition. But it also shone a light on the exacting standards to which the Nationalmannschaft are held and the winning mentality that is ingrained into German football. Low and the players deserved the criticism. They had to take it.

Kroos stood over the free-kick and it was not exactly well placed – to the left of the Sweden penalty area, the angle unkind. The stadium clock showed that the five minutes of stoppage-time were almost up and so were Germany’s World Cup hopes because a 1-1 scoreline, as it stood, was not going to cut it. A draw would mean Germany relinquishing control of their destiny. The criticism would once again have been brutal.

On a personal level, Kroos had erred for the Sweden goal – his uncharacteristically loose pass setting in motion the counterattack for Ola Toivonen’s lovely finish. He knew it. Since the 32nd minute, it had sat with him. Kroos was in line to be a villain.

Everything rested with him, but it is at times such as these when the truly world-class players enter their own zones, in which focus and stillness are the only things that exist. Think of Cristiano Ronaldo and his last-gasp free-kick for Portugal against Spain in the opening round of group games.

Kroos is known for his ice-cool temperament, his composure and his wonderful technique. He showcased them all in a moment that will go down in German football folklore. He had the presence of mind to open up the angle slightly but decisively by rolling the ball to Marco Reus and then having it presented back to him but, really, it was all about the execution.

The whip and bend that Kroos summoned with his right foot was matched by the precision. The ball arced into the far, top corner and, in a flash, Germany was back in love with its world champions.

Low still has problems; there are several areas where Germany have to improve. Having controlled the opening 10 minutes against Sweden, it was shocking to see how vulnerable they were to the counterattack for the remainder of the half. Defensively, there are holes; spaces in behind, which are caused, in part, by Low’s desire to have his full-backs pressed high.

And this is before the form of the centre-half Jerome Boateng is discussed. He was sent off in the 85th minute for a second bookable offence and his suspension for the final group tie against South Korea may not be a bad thing.

Germany hogged 71 per cent of possession, and the statistics also showed they completed 699 passes to Sweden’s 213. Their passing accuracy was 91 per cent. But they managed only nine attempts on goal, five of them on target, which was a poor return from such dominance. The lack of an elite-level No 9 feels like a worry.

Nobody is saying that Kroos’s Roy of the Rovers winner has papered over the cracks, but, in psychological terms, its impact feels monumental. It has provided a touchstone, a point around which the team and, ideally, the country can rally.

It has reinforced the squad’s belief, while it also sends an ominous message to the rest of the World Cup field. Germany do not know when they are beaten. They fight until the last breath, and they will come through. Moreover, there is nothing quite like the feeling when an all-or-nothing gamble comes off.

Low had rolled the dice after Boateng’s dismissal, taking off the left-back Jonas Hector and sending on the attacking midfielder Julian Brandt. He finished with two defenders and five out-and-out attackers. Fortune favoured Low’s bravery and that, too, was fortifying.

Reus described the elation of the victory as “pure ecstasy”, but it was Sami Khedira, the under-fire midfielder whom Low had dropped, who best summed it up. “Pheeeew,” Khedira tweeted. “So important! Now we’re in the tournament. Never write us off.”