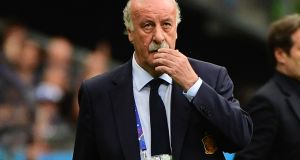 Voicente Del Bosque’s tenure as Spain manager came to a disappointing end as Spain were knocked out by Italy. Photograh: Getty 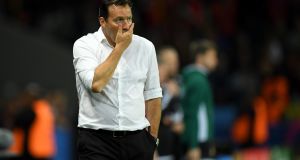 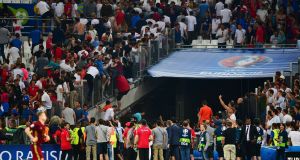 Russia had a miserable campaign both on and off the pitch. Photograph: Getty 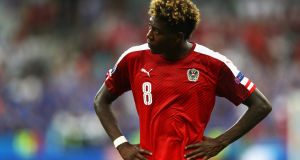 David Alaba’s Austria were some people’s dark horses before the tournament but they exited in the group stages. Photograph: Getty 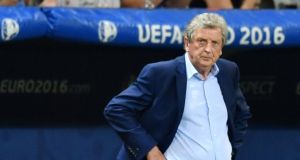 Roy Hodgson resigned as England manager in the immediate aftermath of their infamous defeat to Iceland. Photograph: Getty

England: The build-up to England playing at a major tournament was different to previous years. The old guard of Gerrard, Lampard, Terry, Ferdinand et al had stepped aside to allow Kane, Vardy, Sterling, Alli, Smalling and the rest to shine. Could this new wave of talent finally bring football home in a haze of youthful exuberance?

No, they couldn’t. The dismal display began in the opening game when they conceded a late equaliser to a poor Russian side, continued through the group and culminated in England’s darkest day.

Iceland, a country with a population the size of Leicester, comfortably knocked them out.

Roy Hodgson (pictured) became the latest England manager to conduct a farewell press conference in which he looked like he’d recently returned from some vicious war. Harry Kane (and the rest of the world) contemplated why he had been assigned to free-kicks and corners, reports surfaced of unrest in the camp, the country went in to mourning and it all became very “England at a major tournament”.

Austria: After a qualifying campaign in which they won nine of their 10 games, Austria came in as a fancied dark horse. At 40/1, many a punter parted with money in the hope they could take that qualifying form into the main tournament. It didn’t happen. In their opening game they took on a Hungarian side that hadn’t reached a major tournament for 30 years. Nothing was expected of the Magyars. And that’s how they played. They took the game to Austria, stifled star man David Alaba and won 2-0.

Austria never turned things around. A dour 0-0 draw with Portugal left them needing a win against Iceland. But they never looked up for it. A group of individuals took on a team of tremendous collective heart and spirit . Alaba and co were out. Not too much for Ireland to fear come September, it seems.

Russia: It wasn’t just on the pitch Russia let themselves down.

Little was expected of a squad in which 22 of the 23 players play their club football in Russia. And that was pretty much how they performed.

A spirited late equaliser against England in their opener was as good as it got for Leonid Slutsky’s side as losses to Slovakia and Wales followed.

But it was off the pitch the Russians let themselves down.

While English fans were far from blameless for the violence in Marseille before the opening game, the fact military-like gangs of Russian hooligans were able to attack fans outside and inside the Stade Velodrome poses many questions about the ability of Russia to host the 2018 World Cup.

The fact a Russian football official Igor Lebedev celebrated the actions of those carrying out the violence in France is further cause for concern.

“I don’t see anything wrong with the fans fighting,” Lebedev tweeted. “Quite the opposite, well done lads, keep it up! In nine out of 10 cases, football fans go to games to fight, and that’s normal. The lads defended the honour of their country and did not let English fans desecrate our motherland. We should forgive and understand our fans,” Lebedev told life.ru.

That’s the motherland that will act as host to 32 countries from around the world in just two years time.

Spain: The thing about trying to win three European Championships in a row is that it spans eight years. In fact, it’s really 10 years if you go back to the beginning of the qualification stages for Euro 2008. Golden generations simply don’t last that long. And one golden generation doesn’t follow another. This was the end of an era for Spain. While Torres, Xavi and Villa had already been moved aside, Iniesta, Píque, Ramos, Busquets and, crucially, Del Bosque still remained.

After winning Euro 2008, the 2010 World Cup and Euro 2012 it was always going to be a near impossible task for Spain to raise their game to the same level for a fourth major tournament.

After starting with wins over Turkey and Czech Republic, things began to unravel. A loss to Croatia in their final group game meant that Spain finished second in Group D and therefore took on Italy in the last 16.

Italy wanted it more. As Ken Early put it in this newspaper, the Spanish exit had a very “aw shucks” air about it. They didn’t really seem too bothered by it.The team went off on their holidays, Del Bosque resigned and a new era will dawn for Spain when the World Cup qualifiers come around in September.

Belgium: They were ranked as the second best team in the world, but the “golden” in “Golden Generation” proved to be a more apt way of describing Marouane Fellaini’s hair than Belgium’s ability on the pitch.

Italy firmly put them in their place in the opening game with a comprehensive 2-0 win before hope was resurrected with a 3-0 win over an Ireland side that looked distinctly more Euro 2012 than 2016.

A Radja Nainggolan screamer saw them past Sweden but the team of which there was so much expected came unstuck against an inspired Wales team.

Unrest in the camp had plagued the build-up to the tournament and Marc Wilmots (pictured) never looked adept at handling it. It’s hard to know what’s next for this Belgium side, but it would be a surprise if Wilmots was at the helm.