Dutch duo on ‘a mission’ to get Ireland to Euro championships 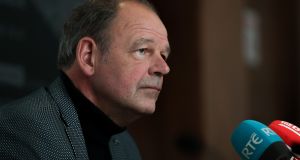 Republic of Ireland goalkeeping coach Jan Willem van Ede: he and head coach Vera Pauw are desperate to repeat the success they kick-started more than a decade ago with the Dutch national team. Photograph: Brian Reilly-Troy/Inpho

With the Republic of Ireland’s vital group games at home to Greece next Thursday at Tallaght and then away to Montenegro looming, goalkeeping coach Jan Willem van Ede says he and head coach Vera Pauw view Ireland’s campaign to qualify for next year’s Women’s European Championships in England as “a mission”.

The Dutch pair are desperate to repeat the success they kick-started more than a decade ago with their own national team. The 56-year-old was brought into the Dutch set-up by Pauw as goalkeeping coach and helped to get the reigning European champions to their first major championship in 2009. They were reunited after she was appointed by the FAI to succeed Colin Bell as manager of the Irish women’s team last year.

The scale of the task they face now, he says, is very much the same.

“It’s a little bit like the same starting point,” he continues. “But they [the Dutch] developed so great. All of the players playing in the first team now, they started 12 years ago when they were really young girls. Vera developed them and I worked with them as well.

“Now, it’s really a mission. That’s why we are here, Vera and I and the other staff members, not only the Dutch but the Irish people as well: to create a situation to qualify for England next year.”

Van Ede, who played more than 400 top flight games in the Netherlands, most of them for his hometown team, Utrecht, had gone on to become technical director at the club before tiring, he says, of life at a desk, and quitting in order to work with players out on the pitch again. Two weeks later Pauw called and his career took an unexpected turn into the women’s game.

You can fight with each other but always in a way that contains respect, and that’s the way I fight with Vera

The relationship with Pauw extends all the way back to their schooldays and seems to run deep, something that helps both take any conflict in the right spirit, he suggests. After she had departed the Dutch job, he stayed on for five years before himself leaving amid mounting tensions with her successor.

“With respect,” he says, “one plus one can be three but with Arjan van der Laan, I was always fighting and it led to nothing. You can fight with each other but always in a way that contains respect, and that’s the way I fight with Vera.”

He fights because he is, even by his own admission, opinionated and sees his role as extending beyond that of goalkeeping coach, not least because, he says, of the way the relationship between them and outfield players has developed in the modern game.

“The standard is much higher for a goalkeeper than it was 10 or 12 years ago,” he says. “We have 11 players and one can use her hands. That’s the way I’m working; looking at the whole situation . . . that’s important with goalkeepers.”

It might be regarded as something of a problem position for Ireland at present, with Marie Hourihan having been prone to errors but, he insists, “mistakes are part of the game; that is not a problem. We cannot create and develop other goalkeepers in a couple of days.

There is, he suggests, in any case, only so much that an international management team can do in terms of shaping players at a time when the game is becoming much more professional and the opportunities to improve are developing hugely due to better club structures.

“You see the circumstances of how they train there. It’s a great gym, all the facilities, and they have a good head coach and a sense of how they want to play so they become better and better.

“In the past, especially the Scandinavian teams, they were very strong because they were physically very strong but it’s not only physical now. There is also the skills of playing football and the way you want to play football. That’s come a little bit closer to the men’s game.”

1 ‘For 25 minutes I ran out of oxygen’: Pepe Reina on his coronavirus battle
2 Rory McIlroy admits Portrush nightmare was catalyst for his return to the top
3 Sky Sports customers set to save on bills until Premier League returns
4 Garry Ringrose to stay with Leinster as he signs two-year central contract
5 Gerry Thornley: Changes to tackle laws could transform rugby by time of next World Cup
Real news has value SUBSCRIBE
Crossword Get access to over 6,000 interactive crosswords