Bouhaddouz heads for infamy to give Iran stunning late win 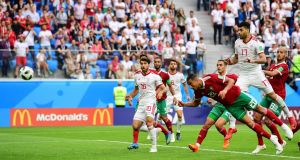 Even when the World Cup is bad, you absolutely have to watch because something you’ll still be talking about for years could happen at any moment. Unfortunately for Aziz Bouhaddouz, Morocco might be discussing his injury-time own-goal, that gave Iran a 1-0 win in this Group B game, for some time to come.

After a promising beginning this had turned into a stultifying, bad-tempered game that not many would have remembered. But then at the very last, Ehsan Haji Safi swung a free-kick over from the left, and Bouhaddouz – only on as a second-half substitute – stooped to head past his own goalkeeper. Afterwards he was in tears, and you can’t blame him: he knows he’ll remember this for a long time yet.

This was not a game to have a headache at. The Saint Petersburg Stadium, a marooned spaceship of a venue on the edge of the Baltic, wasn’t full, but the noise was something else. From the pre-match sound system that Megadeth might have asked to be turned down a notch or two, to the harrowingly familiar din of some vuvuzela-esque horns: let’s just say, it was loud.

Hakim Ziyech, the prowling playmaker who’s just enjoyed such a brilliant season with Ajax, missed the first real chance of the game – quite literally, in fact, swiping at thin air after a beautifully-worked corner routine found him in space on the edge of the box.

Morocco looked much the more threatening side in the opening stages, marrying skill with intensity and so many players – almost too many – looking to swarm forwards and create. They nearly scored after at least three of those men had attempts in a proper goalmouth scramble, while a couple more attacks broke down after centre forward Ayoub El-Kaabi, all left foot, found himself on the right and checked on to his favoured side, rather than attempt a pass with the other.

Amine Harat sashayed through the defence and tried another shot, but to no avail, straight at Ali Beiranvand in the Iran goal. This was a test of everyone’s constitutions as much as it was a football match.

Iran’s best chance came a few minutes before half-time: Vahid Amiri drove a huge hole through the Morocco defence with a wonderful pass to Sardar Azmoun, but the striker took a poor touch and stumbled, losing momentum and taking the sting out of his shot, saved by Monir El Kajoui.

Just as the impetus was taken out of Azmoun’s effort, so went the whole game after the break. Morocco became more and more frustrating, seemingly developing a team-wide knack for making the wrong decision time after time. So too Iran, whose big threat, Alireza Jahanbakhsh, was anonymous: last season the AZ Alkmaar winger became the first Asian player to ever finish top-scorer of a major European league, but he offered little here.

There was a concerning moment with around 20 minutes left, when Watford’s Nordin Amrabat looked like he was knocked cold out, after a shoulder crashed into his jaw. His team-mates gathered around and immediately looked fretful, as for a few seconds Amarabat didn’t move. He eventually got to his feet and tried to come back on, but after staggering around and having to be kept upright by the arms of the physios, sense prevailed and he was replaced by his brother, Sofyan.

That injury, then a few minutes later one to Iran’s Omid Ebrahmimi, who went off clutching his side, combined to provide a short breather, which in turn sparked a more cohesive spell for the Moroccans. Ziyech popped up in the left channel of the box to direct a decent effort towards the corner, but Beiranvand did well to dive and save.

As much as anything, credit must be given to the goalkeeper that he managed to retain his concentration after the preceding insipid 30 minutes.

It was a brief period of interest, though. A few moments later Ziyech spread a simple pass to Achraf Hakimi on the left flank, but he averted his gaze and let the ball bobble underneath his foot for a throw. A few moments later Ramin Rezaeian, upon receiving a light tap on the shin, gave us a little entertainment with an elaborate series of twists, turns and rolls.

By this point it was a game that everyone wanted to be over. But there was one last twist. Bouhaddouz intervened, marking space at the near post, and the Iranians burst with joy. – Guardian service