Ziyech shines again for Chelsea as they brush aside Burnley 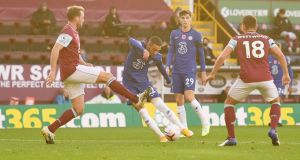 Hakim Ziyech scored one and set another up on his full Premier League debut as Chelsea blew struggling Burnley away 3-0 at Turf Moor.

The Moroccan winger scored on his first start for the club in midweek, a 4-0 romp at FC Krasnodar, and impressed again as he held his starting spot against the Clarets.

Ziyech opened the scoring with a crisp drive in the first half as Frank Lampard’s men swarmed the hosts, and provided the assist for Timo Werner when Chelsea rounded out the scoring later on.

In between Kurt Zouma sucked the life out of a potential fightback when he powered home a Mason Mount corner.

While a third win of the season propelled Chelsea into the top four, temporarily at least, Burnley remain anchored at the wrong end of the table with just one point from six games.

Chelsea were forced into a hasty change of personnel just before kick-off, Christian Pulisic pulling up in the warm-ups. Werner was duly promoted from bench duty, with a second goalkeeper, youngster Karlo Ziger, added to the replacements.

Pulisic had scored a hat-trick on his previous visit here almost exactly a year ago, but the visitors had no shortage of attacking talent at their disposal, with Tammy Abraham back to lead the line with Werner and Ziyech either side while Kai Havertz and Mount pushed up from midfield.

That left N’Golo Kante a slightly solitary screening brief in front of the defence and Burnley took just five minutes to find a way through, Matt Lowton’s precise ball over the top putting Ashley Barnes one on one with Edouard Mendy.

The goalkeeper dashed out and Barnes snatched at what was a wonderful chance, lifting his shot high over the crossbar before being bundled over for his trouble.

Having digested their warning, Chelsea assumed full control for the remainder of the match. Full-backs Reece James and Ben Chilwell made full use of the space out wide, delivering a series of dangerous balls into the box.

The pair might have combined for the opening goal but when Chilwell rose at the back post to meet James’ hanging cross, Josh Brownhill gave him a nudge in the back that went unpunished.

With Kante denying Burnley the chance to release pressure up the field it seemed certain the visitors would break the deadlock sooner rather than later. The moment arrived when Ziyech linked up with the storming James down the right, peeling back into the box and waiting on a smart lay-off from Abraham, who touched the ball back off his instep.

Ziyech struck first time and saw his low shot wrong-foot Nick Pope on its way over the line.

Chelsea worked away in pursuit of a second and would have had it just before the break had Kevin Long not slid in front of Werner at the back post.

Jay Rodriguez replaced Dale Stephens at half-time as Burnley looked for a difference maker and they were instantly a livelier presence, Barnes and James Tarkowski both shooting wide as they found a way to test their opponents.

But their newfound energy was sapped in the 63rd minute, when Mount’s right-sided corner was met emphatically by the head of Zouma as three Claret shirts failed to address the danger. To be so soundly bested at a set-piece must surely have hurt manager Sean Dyche.

Things got worse still with 20 minutes remaining, a misguided pass out from defence landing straight at the feet of James, who quickly fed Ziyech.

This time he settled for an assist, playing in Werner on the overlap, with the German striker stroking deftly across Pope and into the corner.

Substitute Olivier Giroud had a late effort scrubbed for offside but the result already told a fair story of a one-sided match.