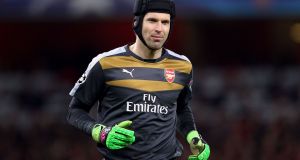 Tottenham could be handed a double boost in midfield with Dele Alli expected to return from an ankle injury after he came off the bench against West Ham on Wednesday, while Mousa Dembele has overcome a groin strain. Clinton Njie and Jan Vertonghen will both miss the match with knee injuries.

Arsenal will be without Petr Cech and Laurent Koscielny as both are sidelined with calf injuries. Cech is set to be missing for up to a month but defender Koscielny could be back in a week. Jack Wilshere (leg), Tomas Rosicky (thigh), Santi Cazorla (knee) and Alex Oxlade-Chamberlain (knee) are all out.

Chelsea (10) v Stoke (7)
Chelsea captain John Terry is still recovering from a hamstring strain. Blues manager Guus Hiddink, however, confirmed Diego Costa would start against the Potters, while Kenedy’s groin problem will be assessed. Alexandre Pato could make his Chelsea debut, but it is likely to be off the bench, while Falcao (thigh), Kurt Zouma (knee) and Pedro (hamstring) are all out.

Stoke right back Phil Bardsley is facing a spell on the sidelines with a pulled calf sustained in Wednesday’s win against Newcastle, while fellow defender Geoff Cameron is a doubt due to ankle pain. Ryan Shawcross (back) is not yet ready to make his comeback, while Charlie Adam (calf), Shay Given, Glen Johnson and Marc Wilson (all knee) also remain sidelined.

Everton (11) v West Ham (6) - Live Setanta Sports 1, 3pm
Leighton Baines is to see a specialist about pain in his ankle but is still expected to be available for Everton. Bryan Oviedo is being assessed after sustaining a knock in Tuesday’s 3-1 win at Aston Villa, along with Tom Cleverley, who missed that match due to illness. Muhamed Besic and Darron Gibson could make their returns to action.

West Ham defender James Collins is set to miss the next three matches with a hamstring problem which was revealed in a scan after 1-0 victory over Tottenham. Victor Moses, Winston Reid (hamstring), Joey O’Brien (hamstring), James Tomkins (calf), Enner Valencia (ankle) and Sam Bryam (suspended) are still out.

Man City (4) v Aston Villa (20)
Yaya Toure is set to return for Manchester City after the Ivory Coast midfielder missed the midweek defeat at Liverpool with a foot injury sustained in the Capital One Cup final last Sunday which City won against the same opponents in a penalty shoot-out. Long-term absentees Kevin De Bruyne, Samir Nasri and Fabian Delph are on the sidelines.

Aston Villa have no new injury worries. Carlos Sanchez (hamstring), Jack Grealish (ankle), Libor Kozak (ankle), Adama Traore (foot) and Jordan Amavi (knee) are all sidelined. Rudy Gestede could start after coming off the bench to score in Tuesday’s 3-1 defeat to Everton but Charles N’Zogbia remains out of boss Remi Garde’s plans despite being fit.

Bournemouth have concerns over midfielder Harry Arter and forward Josh King with calf problems. Midfielder Junior Stanislas missed the midweek win over Southampton with a hamstring injury, and remains a doubt. Winger Max Gradel is again expected to be in contention, having come through 85 minutes against the Saints as he continues his recovery from a long-term knee injury.

Southampton (9) v Sunderland (17)
Southampton will be without strikers Charlie Austin (hamstring) and Shane Long (knee) after both were injured against Bournemouth. Austin has been ruled out for up to four weeks but Long could return sooner. Jay Rodriguez (ankle) and Florin Gardos (knee) are out.

Sunderland skipper John O’Shea is expected to be fit after suffering a calf muscle injury in the 2-2 draw with Crystal Palace. Lee Cattermole misses out after suffering concussion in the same game. Jeremain Lens continues his recovery from hernia surgery, while striker Duncan Watmore will be sidelined for some time by an ankle ligament problem.

Swansea (16) v Norwich (18)
Swansea are set to restore the regulars who were rested for the midweek victory at Arsenal with Angel Rangel, Federico Fernandez, Neil Taylor, Leon Britton, Gylfi Sigurdsson and Alberto Paloschi all available. Swansea head coach Francesco Guidolin will miss the game as he has been in hospital with a chest infection since Wednesday.

Norwich could be without Alex Tettey for the rest of the season with the midfielder set for an operation on his injured ankle. Robbie Brady lost teeth in a clash of heads with Gary O’Neil, who was left with a deep gash, during the midweek home defeat by Chelsea, but both are expected to be available. Forward Steven Naismith, centre half Sebastien Bassong and on-loan Chelsea striker Patrick Bamford should return. Defender Andre Wisdom remains out with a knee problem.

Leicester could have N’Golo Kante back after he had initially been expected to miss out due to the hamstring injury that ruled him out of the 2-2 draw with West Brom. Manager Claudio Ranieri has confirmed goalkeeper Kasper Schmeichel, who reportedly played against Albion with a minor back injury, will be available.

Crystal Palace (14) v Liverpool (8) - Live Sky Sports 1, 1.30pm
Connor Wickham and Wayne Hennessey will undergo late fitness tests for Crystal Palace. Striker Wickham is suffering with a thigh injury, while goalkeeper Hennessey could be replaced by Julian Speroni if he is not passed fit. Pape Souare will start after returning from suspension, with Martin Kelly expected to be dropped, leaving only James McArthur and Jason Puncheon – expected to return to training on Monday – as manager Alan Pardew’s other absentees.

Liverpool midfielder Lucas Leiva has been ruled out for up to six weeks with a thigh strain. Striker Daniel Sturridge will return to the starting line-up with Philippe Coutinho after both were rested for the midweek win over Manchester City. Manager Jurgen Klopp has to decide whether to stick with right back Nathaniel Clyne on the left to allow Jon Flanagan to play, or restore genuine left-sided player Alberto Moreno.

West Brom (13) v Manchester United (5) - Live Sky Sports 1 , 4pm
Jonny Evans is not yet ready to return for West Brom with a hamstring injury continuing to keep the defender out. Midfielder Chris Brunt found out this week he will miss the next six months having ruptured his anterior cruciate ligament. West Brom will also be without Callum McManaman (ankle) and James Morrison (hamstring).

Chris Smalling (shoulder) could return for Manchester United. Phil Jones (ankle), Antonio Valencia (foot) and Marouane Fellaini (hamstring) may also be involved. Michael Carrick is set to feature, having been rested against Watford on Wednesday. Wayne Rooney, Bastian Schweinsteiger, Will Keane and Luke Shaw remain absent, while Cameron Borthwick-Jackson is also expected to miss out.