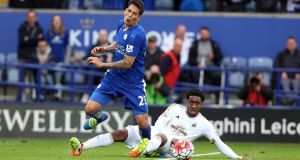 Swansea have confirmed the signing of Leroy Fer from QPR for an undisclosed fee.

The Holland international midfielder has signed a three-year contract after impressing manager Francesco Guidolin while on loan last season.

He then made 11 appearances for the club, who are his third in English football.

“I’m very happy, from the first minute I felt at home,” he told the club’s official website. “We did very good in the second half of the season.

“If we play like that, we can aim for higher, and that’s what we want. Hopefully some new strong players (will) come in to help us.

“It makes it easier for me as well, if a coach wants you. (Guidolin) was surprised (at my ability), he said.”

The 26-year-old Fer first joined Norwich in 2013. QPR signed him the following year after Norwich were relegated, but QPR also went down, before last season’s loan move to Swansea.

He scored eight times in 50 appearances for QPR, and has represented Holland 11 times.