Steven Gerrard signs off with 6-1 defeat at Stoke City 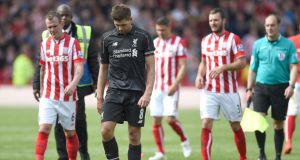 Liverpool’s season-ending meltdown was completed at the Britannia Stadium where Stoke won 6-1 to inflict the Reds’ heaviest defeat for 52 years while notching their biggest home victory over the Merseysiders in over a century.

Brendan Rodgers insisted on Friday he was 150 per cent sure he would be manager next season despite his side missing all the targets Fenway Sports Group set him back in August.

But eight points from their final nine matches indicate a collapse of epic proportions, and performances like this one are just the sort which owners take notice of. Rodgers’ end-of-season review with FSG’s high-ranking Anfield representative Mike Gordon should be an interesting one next week.

The shambles of a failing campaign was encapsulated in 45 minutes with Mame Biram Diouf scoring a brace, with Charlie Adam, Jon Walters and Steven Nzonzi also on target before the interval — the first time Liverpool had conceded five first-half goals in top-flight league since 1976 against Aston Villa. Steven Gerrard pulled one back on his last appearance for the club but substitute Peter Crouch made it 6-1 late on.

If Rodgers thought he had problems with Raheem Sterling, whom he left out the starting line-up for the first time in over three months after a week of headlines about his contract, this underlined the extent of the issues he has to address in the summer.

Harry Kane rounded off his memorable breakthrough campaign with his 31st Tottenham goal of the season as Mauricio Pochettino’s men sealed fifth spot and a place in next term’s Europa League.

The 21-year-old’s journey from squad player to talisman at White Hart Lane has been one of the stories of the season and he provided one final reminder of his quality during a largely mundane encounter at Goodison Park.

The PFA Young Player of the Year headed Eric Dier’s 24th-minute cross beyond Tim Howard in a 1-0 victory which lifted Spurs up to fifth, above Everton’s local rivals Liverpool.

While the red half of Merseyside was undoubtedly experiencing a more grim final afternoon at Stoke, there was little cheer for the Blues either. They missed out on the top 10 just one year on from their fifth-placed finish in Roberto Martinez’s maiden campaign.

Frank Lampard brought his glittering career in English football to an end in fitting fashion with a goal in Manchester City’s 2-0 victory over Southampton.

The former England and Chelsea midfielder, made captain in his final game before joining New York City, opened the scoring as City wrapped up their Barclays Premier League campaign with a sixth successive win.

Lampard left the action in the 77th minute to a huge ovation from all sides of the ground before the prolific Sergio Aguero grabbed the second from close range three minutes from time.

It was the Argentinian’s 26th Premier League goal of the season and underlined his status as golden boot winner. But the main headlines were taken by Lampard, who signed off with his 259th goal in his 882nd club appearance in English club football.

Theo Walcott plundered a hat-trick as Arsenal gave themselves the perfect warm-up for the FA Cup final with a 4-1 win over West Brom in the last match of the Barclays Premier League season.

Walcott, who has yet to commit his long-term future to the Gunners, laid down a marker to be included in the starting XI at Wembley with a blistering first-half display from a central striker’s role.

The England forward, who has battled back from a serious knee injury, cracked in the opening goal after just four minutes, and then quickly doubled Arsenal’s lead before Jack Wilshere, on his 100th league appearance, volleyed in a superb third.

Walcott completed his hat-trick on 37 minutes with a close-range tap in to end the match as a contest before half-time.

Just before the hour, Gareth McAuley headed a consolation for the Baggies, who had beaten champions Chelsea 3-0 in midweek.

Gunners boss Arsene Wenger and his squad returned to the pitch after the final whistle for a lap of appreciation having secured third place and with it automatic qualification for the Champions League.

Jamie Vardy and Charlie Austin both marked their England calls by scoring as Leicester sent QPR back to the Sky Bet Championship with a 5-1 victory at the King Power Stadium.

England manager Roy Hodgson raised a few eyebrows when he named the two former non-league strikers in his squad for the friendly away to the Republic of Ireland and the Euro 2016 qualifier in Slovenia next month, but both men showed scoring instincts as Leicester wrapped up their Barclays Premier League season in style.

There was a real party atmosphere as Leicester celebrated their top-flight survival, secured by a goalless draw at Sunderland last week, with their biggest win of the season and victory made it 22 points from 27 for Nigel Pearson’s escapologists.

Chris Ramsey was appointed QPR manager on a permanent basis this week with a three-year contract but he has much work to do on this evidence as his side crumbled to finish bottom of the league. Their relegation fate was sealed before this latest embarrassment.

Vardy, Marc Albrighton, Leonardo Ulloa, Esteban Cambiasso and substitute Andrej Kramaric were all on target for Leicester with Austin’s glancing header the solitary consolation for the sorry visitors.

Marouane Chamakh fired a rare goal to complete Alan Pardew’s fairytale return to Crystal Palace, but it was a bitter-sweet experience for the Moroccan forward.

Chamakh combined with Scott Dann in the second half to claim only his fourth goal of the season, but shortly after he crashed to the deck in agony after damaging his left hamstring while in full flight and he had to be helped from the pitch.

The 1-0 victory over Swansea was the 10th win of Pardew’s 18 Barclays Premier League games as Palace boss and it brought down the curtain on a superb six months for the former Newcastle United manager.

Pardew arrived at Selhurst Park in January with the Eagles stuck in the relegation zone but 18 matches later they have finished 10th, setting a club record for the Premier League.

Palace could have scored more during a dominant second half, but Swansea keeper Lukasz Fabianski made some fine saves. The Swans were guaranteed to secure eighth place regardless of what happened in south-east London and while it was not the result they wanted, the loss failed to take the gloss off an impressive campaign under boss Garry Monk.

Burnley signed off from the Barclays Premier League with a deserved 1-0 win at Aston Villa as Danny Ings gave them a perfect leaving present.

But the striker’s first-half winner still meant the Clarets finished second bottom as they made a swift return to the Football League.

It was his 11th of the season and possibly last strike for the club with the out-of-contract forward expected to leave Turf Moor in the summer.

Villa, subdued for most of the first half, struggled to make a breakthrough although Tom Heaton saved from Gabriel Agbonlahor, Christian Benteke and Ashley Westwood.

Defeat saw Villa finish fourth bottom in the Premier League, ahead of the FA Cup final with Arsenal on Saturday, after another brush with the drop.