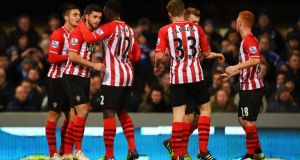 Shane Long (second from left) is congratulated by his Southampton team-mates after opening the scoring in the FA Cup third-round replay against Ipswich Town at Portman Road. Photograph: Shaun Botterill/Getty Images

Having produced what several experts described as the perfect away performance to beat Manchester United in the Premier League on Sunday, Southampton produced a similarly professional effort to dispose of Championship opposition in the FA Cup, but at the sort of expense Ronald Koeman had dreaded.

The sight of Victor Wanyama limping off at half-time clutching a hamstring, along with the news that another key Saints midfielder, Morgan Schneiderlin, had picked up an adductor injury at Old Trafford, leaves the Dutch manager facing a major problem as the Saints look to maintain their challenge for Champions League qualification.

Koeman had already made plain his concern at having to play an unexpected extra game, the more so given it meant the Saints facing three consecutive matches away from home. Having said he wanted to play his strongest side in this competition, he made five changes and switched to a 3-5-2 formation, with youngsters Harrison Reed and Matt Targett, along with the rather more experienced Shane Long, among those coming in. Florin Gardos, who excelled after coming on for the injured Toby Alderweireld in the first half against Manchester United, retained his place as one of the three centre backs, alongside José Fonte and Ryan Bertrand.

The Ipswich manager, Mick McCarthy, who had made six changes for the original tie, made four from the weekend defeat by promotion rivals Derby County. With a sickness bug depriving him of a trio of regular midfielders – Luke Hyam, Kevin Bru and Darren Ambrose – all of whom played in the first game at St Mary’s, came back in.

Ipswich nearly made the perfect start, Stephen Hunt sliding the ball under the Saints goalkeeper, Fraser Forster, with aplomb after running on to Kevin Bru’s delicate through-ball. Unfortunately the veteran Irish midfielder had strayed marginally offside before doing so but the episode heartened Portman Road’s biggest crowd for several years. With Ambrose having belted a long-range effort well over the bar, the Tractor Boys had made the more positive start but it did not take Koeman’s side long to calm the mood.

They did so in the best possible way and if there was a stroke of good fortune involved when they took the lead in the 19th minute, the move that preceded it was of Premier League quality. Nathaniel Clyne, found in space on the right by Reed, played the ball into the feet of Dusan Tadic whose step-over allowed James Ward-Prowse room to drive into the Ipswich penalty area. The midfielder’s touch was slightly heavy, allowing Luke Chambers to slide in, but the clearance went straight to Long who turned it first-time and on the volley past the wrong-footed Bartosz Bialkowski in the Ipswich goal.

Ward-Prowse nearly doubled the visitors’ lead soon afterwards, his powerful shot deflected just over the bar after good work by Wanyama. It was a measure of Southampton’s control at this stage that having seen a handful of crosses from the left easily claimed by Forster, Ipswich looked to have run out of ideas. Christophe Berra’s appeal for a penalty after his header brushed Fonte’s arm certainly had a slightly desperate quality.

With half-time approaching Berra had to put his body on the line to block Tadic’s shot while at the other end David McGoldrick sliced wastefully wide after Town finally created a shooting opportunity in the Southampton penalty area.

Wanyama’s replacement by Steven Davis during the interval made little difference, initially, for all the urgings of the Ipswich faithful. Tadic, given an early and excellent opportunity to shoot, was criminally casual in allowing himself to be closed down, but the visitors continued to dominate possession.

Aware something had to change, McCarthy sent on the highly-rated Tyrone Mings for Hunt on the left side of midfield. Demonstrating his versatility, Mings immediately made Ipswich’s best chance with a cross which Ambrose should have done better from than give Forster a simple save.

With Southampton’s three at the back, now more often than not five, however, and the line superbly organised by Fonte, it was a very rare chance.

Bru produced an effort from outside the area that dipped a couple of feet over Forster’s bar but otherwise it was matter of the visitors playing out time.

Ties to be played across the weekend beginning January 24th.