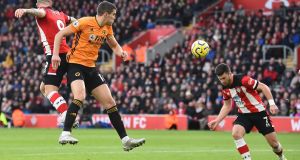 Wolverhampton Wanderers came back from two goals down to beat Southampton 3-2 at St Mary’s Stadium as the visitors ended their three-match winless run in the Premier League.

The hosts took a 2-0 first half lead through Jan Bednarek and Shane Long, who scored his first league goal since last April, only for Wolves to respond early in the second as Pedro Neto scored from a drilled cross from Adama Traore.

Wolves were soon awarded a penalty after the video assistant referee (VAR) overturned on-field referee Darren England’s initial decision not to give a foul on Jonny inside the box.

In-form Mexican striker Raul Jimenez scored from the spot before completing the comeback in the 76th minute with his 19th goal for Wolves across all competitions this season.

Southampton had their own chances to respond through Nathan Redmond and Ryan Bertrand but they failed to find the back of the net as the hosts suffered their first defeat in six league matches.

The result means Wolves moved up to sixth in the standings and level on points with fifth-placed Manchester United, while Southampton remain 12th.

John Fleck struck a late equaliser as Sheffield United came from behind to seal a Premier League point against a frustrated Arsenal.

Gabriel Martinelli’s ninth goal in 10 Arsenal starts appeared to have the Gunners on course for a win but Fleck struck with seven minutes remaining to secure a 1-1 draw for the visitors.

Arsenal head coach Mikel Arteta was without captain and top goalscorer Pierre-Emerick Aubameyang, who watched from the stands as his replacement Martinelli scored at the end of a quiet first half. He even tweeted that he saw Martinelli, 18, as a future “superstar” as the Brazilian and Bukayao Saka - three months his junior and playing out of position at left-back - were Arsenal’s best players.

But, as they have struggled to do for some time, the hosts could not see out the contest and had to settle for a share of the spoils which sees them ninth in the table and four points adrift of the Blades.

Pitchside monitors were used for the first time in the Premier League as Norwich City earned a crucial 1-0 win in their fight for survival over Bournemouth at Carrow Road, in a match where both sides had a man sent off.

Steve Cook’s blatant handball in the penalty area as he attempted to block Ondrej Duda’s strike earned the Bournemouth captain a red card with just 31 minutes on the clock. Teemu Pukki dispatched the penalty down the middle, easing the home crowd’s nerves.

Bournemouth pressed for an equaliser after the break and they got a boost as Ben Godfrey was sent off with 14 minutes left after referee Paul Tierney was advised by VAR to have another look at Godfrey’s tackle on Callum Wilson.

After the Professional Game Match Officials Limited, the body that manages elite referees, issued guidance for referees to use the screens this week, Tierney took a second look and brandished the red card, having initially shown a yellow.

The home side held on nonetheless for the win, moving them to within three points of Bournemouth in 19th place, with Eddie Howe’s men now three points from safety after a 10th defeat in their last 12 league games.

Dominic Calvert-Lewin denied West Ham owners David Sullivan and David Gold a happy anniversary as Everton battled to a 1-1 draw at the London Stadium. The striker registered his 11th goal of the season moments after Issa Diop had given the hosts the lead.

This weekend marks 10 years since Sullivan and Gold bought West Ham, and the controversial duo admitted in their programme notes that the club have not progressed on the pitch as much as they had hoped in that time. It was hard to argue against that sentiment as West Ham were 17th when they took over, and a decade on they kicked off against Everton in precisely the same position.

Hammers boss David Moyes, facing his old club, had called for his players to give record signing Sebastien Haller more service and Mark Noble did just that, standing up an early cross which the French striker headed narrowly wide. The goal West Ham had been threatening arrived five minutes before the interval, Snodgrass whipping in a free-kick and Diop glancing in a header.

But Everton hit back immediately, also from a set-piece, when Mason Holgate flicked on a corner for Calvert-Lewin to convert at the far post.

Pickford almost dropped a clanger early in the second half when he spilled a high ball but Holgate bailed him out by collecting Haller’s prod at goal. The England keeper just about held on to another Haller header and clawed a deflected Snodgrass header wide as West Ham pushed for a winner.

The Hammers were left frustrated, though, and sub Albian Ajeti survived a late VAR check for a possible red card after planting the back of his head into Holgate’s face.

Jack Grealish continued his fine goalscoring form against Brighton to salvage relegation-threatened Aston Villa a point from a 1-1 draw at the Amex Stadium.

Villa captain Grealish scored for the fourth successive meeting with Albion by lashing home 15 minutes from time and earning the visitors a potentially vital point in the battle for survival.

Dean Smith’s 18th-placed visitors remain a single point from safety, while Brighton are just three points better off after failing to hang on to their slender lead. Tempers boiled over at the final whistle, with an altercation between Neal Maupay and Douglas Luiz leading to the players being separated by team-mates.

1 Keith Duggan: Through the glories and the disgraces, we were all Maradona addicts
2 GAA Statistics: Can Cavan and Thomas Galligan beat Dublin with the long kickout?
3 Rugby Stats: Blame game at lineout time is on the whole team
4 All bets are on as America opens the gambling sluice gates and the dollars flow
5 Andy Farrell to delve deeper into Irish squad for team to play Georgia
Real news has value SUBSCRIBE