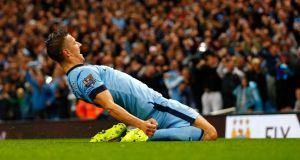 The moment that probably summed up the difference between Mario Balotelli’s old club and his new one came midway through the second half and within a few seconds of the crowd rising to acclaim Sergio Aguero’s introduction as a second-half substitute. Aguero’s first touch was to control a through ball from Jesus Navas. His second despatched the ball past Simon Mignolet for Manchester City’s third goal and another devastating reminder of their extra firepower.

Stevan Jovetic, ordinarily Manuel Pellegrini’s fourth-choice striker, had already provided a couple of his own on the night City joined Chelsea, Tottenham Hotspur and Swansea City as the four clubs to have started the season with back-to-back wins.

Liverpool had actually matched the champions for long periods but they did not threaten Joe Hart’s goal with any sustained momentum until a header from their substitute, Rickie Lambert, came back off the goalkeeper and went in off Pablo Zabaleta eight minutes from the end.

It was typical of Brendan Rodgers’s team that, briefly, they still thought they could complete a late comeback but it was always unrealistic and this was the first night when it became clear how much they might miss the penetrative qualities of Luis Suarez and why they have taken their gamble on Balotelli.From his vantage point in the Colin Bell stand, Balotelli must have liked the quick, penetrative way his new team broke on the counter-attack. Yet there was a reminder about what he had left as well when the huge ‘Champions of England’ banner was unveiled before kick-off.

There was a neat symmetry about City’s first home match being against the team they had deprived of the title and their supporters indulged in some malicious pleasure at the expense of Steven Gerrard. Yet Liverpool, despite their lack of menace in attack, still showed Balotelli they are a better team now than during his last time in English football.

Gerrard was prominently involved at the base of their midfield, with Joe Allen and Jordan Henderson playing slightly ahead of him and the width provided by Raheem Sterling and Phillipe Coutinho. Sterling’s pace and directness could trouble the most accomplished defence and it was unusual to see an away team come to City and have as much of the ball as Liverpool did for long spells.

Balotelli’s new team had been the more composed side in the opening half an hour but their problem last season quickly resurfaced and Jovetic’s first goal four minutes before half-time was another reminder that a side with Liverpool’s ambitions cannot get away with defending this generously.

Jovetic took his chance clinically, driving his right-foot low and hard beneath Mignolet, but the goal was a personal ordeal for Liverpool’s new left-back, Alberto Moreno, bearing in mind the €15m signing from Sevilla really ought to have made sure there was never any chance for his opponent in the first place.

Dejan Lovran had just nodded the ball away from David Silva and the only requirement for Moreno was to get the ball out of the penalty area. His was a lazy swing at the ball and he connected only with thin air. Jovetic had shown far greater anticipation, nipping in to pinch the ball and leave himself with a clear angle to fire in his shot. Until that point, City had struggled to get behind the away side’s defence. Liverpool started the game with good structure and, much like their visit to this stadium last season, no sense whatsoever of being overcome by caution.

City’s home record over the last three seasons incorporates only three defeats but Rodgers always set up his side to take the game to the opposition and, until Moreno’s mistake, they had managed to turn down the volume on the home supporters.

City taking the lead did not completely shift the feeling that the champions were still a good notch or two below their best. Yaya Toure did not always look his usual commanding self, much like his performance at Newcastle on the opening weekend.

Silva always wanted the ball but City’s full-backs, Zabaleta and Gael Clichy, usually like to break forward more than was evident in this match.

One of the great strengths about Pellegrini’s team is the way they gang up on the opposition full-backs in wide positions. Clichy was held back by the threat of Sterling and it was noticeable that when Zabaleta did venture forward it helped City to their second goal.

For Liverpool, there was plenty of the ball. They played every pass, indeed, apart from the killer one. Daniel Sturridge was denied a goal for offside early in the second half and could also reflect on their most inviting chance of the opening period, when he eluded Vincent Kompany but could not beat Joe Hart in the City goal.

Liverpool, however, did not have the same menace without Suarez and it should have become very clear to Balotelli why they wanted another striker.

Aguero had replaced the injured Dzeko, making an immediate impact with his burst of acceleration to get behind Lovren from Navas’s pass.

Liverpool’s goal originated with Sturridge dispossessing Martin Demichelis to cross for Lambert but Glen Johnson went off soon afterwards when Rodgers had always used his three substitutes and City did not have too many more problems.