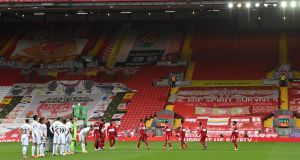 Empty stands look set to continue at Premier League matches as plans for the partial return of fans have been paused. File photograph: Getty Images

The British government has dealt a devastating blow to sport by pausing its plans for the partial return of fans to stadiums on October 1st because of the rapid spike in Covid-19 cases. It will add to growing fears that clubs could go out of business due to lack of gate receipts for potentially months more to come.

The decision, which was first reported by the Guardian newspaper on Monday, was confirmed by Michael Gove, who told BBC Breakfast: “We do want to, in due course, allow people to return to watch football and other sporting events but it is the case that we just need to be cautious at the moment and I think a mass reopening at this stage wouldn’t be appropriate,” the Cabinet Office minister said.

Organisations will now be asked to forecast the potential financial impact of playing behind closed doors at least until next year. However many will fear they could go the same way as Macclesfield Town, which was wound up last week after a judge was told the football club owe more than £500,000.

The British prime minister is facing growing pressure to avert the looming crisis in professional and grassroots sport, with a letter signed by the leaders of more than 100 sports organisations – including the Premier League, English Football Association, English Rugby Football Union and UK Athletics – warning of the risk of a “lost generation” of sport and activity if he fails to act.

The letter urges the government to set up a “comprehensive support package” for the sport and physical sector combining investment, tax incentives, and regulatory reform in order to help clubs, organisations and facilities stabilise and survive. “We are united in our concern that at a time when our role should be central to the nation’s recovery, the future of the sector is perilous,” the letter states. “Covid–19 has exposed the fragility of vital services and assets, with sports clubs and fitness facilities facing permanent closure, depriving local communities of facilities and programmes on which they depend.

“Covid-19 has undermined our commercial revenue streams with both stadia and leisure facilities closed or greatly reduced in capacity. The impact of this will potentially lead to a lost generation of sport and activity. In order to play our fullest role, we must survive and stabilise.”

The Premier League wrote to the government this month to warn that football stands to lose £100m a month while games are played behind closed doors. The RFU plans to make 139 staff redundant as it tries to cope with £107m in lost revenue while last week the ECB also announced 62 job losses and said it has lost £100m already this year.

In a speech to the Sport and Recreation Alliance annual conference on Monday, the British sports minister, Nigel Huddleston, insisted the government is “putting sporting and health at the heart of its coronavirus agenda”. However, he admitted: “It’s no exaggeration to say that the pandemic has profoundly affected the sporting landscape, and will continue to do so for many months to come.” - Guardian