Aubameyang headlines deadline day as City fail to get Mahrez 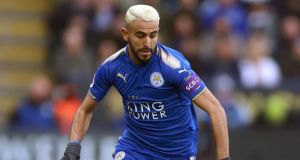 Pierre-Emerick Aubameyang’s club-record move to Arsenal was the headline deal on a frantic deadline day that saw Manchester City accept defeat in their pursuit of Leicester’s Riyad Mahrez.

The English leagues were awash with last-minute activity as the transfer window came to a close on Wednesday evening, with Arsene Wenger’s Gunners the biggest movers.

As well as reportedly agreeing a contract extension with Mesut Ozil, Arsenal forked out a club-record £56million (€64m) to bring in long-standing target Aubameyang from Borussia Dortmund on a long-term deal.

“I think the club has such a big history and great players like Thierry Henry, ” the Gabon international told Arsenal Player.

“He’s an example for us strikers because he was fast and scored a lot of goals.

Manchester City were also in the market for another big signing, having brought in Athletic Bilbao’s Aymeric Laporte for a club-record fee on the penultimate day of the window.

The Premier League leaders enquired about Leicester playmaker Mahrez but were put off by the Foxes’ £95million (€108m) valuation.

City were only willing to pay up to £60million (€68.5m) for the 26-year-old — and manager Pep Guardiola was understanding about the club’s stance on Mahrez.

“It is not a problem, believe me, but I admire the club for having parameters,” he said after the 3-0 win against West Brom.

“Maybe in the future we will be able to buy a player for £100million but if it happens it will be for a special, special player. At the moment we cannot afford that.

“People say why do you say that, when you spend more than £300million. I say that because I follow the club.”

Mahrez has been keen to leave the King Power Stadium since submitting a transfer request last summer and is understood to be unhappy about being priced out of a move to the Etihad Stadium.

Two Leicester players did leave to join fellow Premier League sides on deadline day, though, as Andy King headed to Swansea on loan and Islam Slimani joined Newcastle until the end of the campaign.

Sparta Prague goalkeeper Martin Dubravka also moved to the Magpies on loan, while Andre Ayew returned to Swansea from West Ham in a club-record deal understood to be £18million (€20.5m) rising to a possible £20million (€23m).

Former non-league striker Jordan Hugill joined the Hammers after impressing at Preston, while Lucas Moura completed his long-awaited switch from Paris St Germain to Tottenham for a reported £25million (€28.5m).

Ademola Lookman and Mo Besic left the Toffees on loan for RB Leipzig and Middlesbrough, respectively.

Republic of Ireland full-back Cyrus Christie completed a late night move to Fulham last night just six months after a transfer to Middlesbrough had appeared to provide the 25-year-old with regular first team football again and a potential path to Premier League football.

Middlesbrough’s push for promotion faltered, though, and the appointment of Tony Pulis proved to be bad news for the defender as a change of playing style resulted in him being marginalised somewhat, just as had happened in similar circumstances during the latter part of his time at Derby.

There were reports on Wednesday of interest from Fulham in the player, who had made just two very brief appearances from the bench in recent weeks, but it was only late in the evening that things seem to move on and Fulham finally announced the deal close to the 11pm transfer deadline.

Christie arrives at the London club on a three and a half year deal with the option of another season.

“He is a fantastic young player who brings both an international pedigree and a wealth of Championship experience with him,” said Tony Khan, the club’s Director of Football.

“I can’t wait for him to join us and help the squad continue to push for promotion.”

Henderson had returned to Portsmouth, where he played around 25 games during the 2011-12 season from Nottingham Forest on loan until the end of the season while Murphy, a striker who started his career at Arsenal, joins Gillingham on a permanent deal from Forest Green. EM